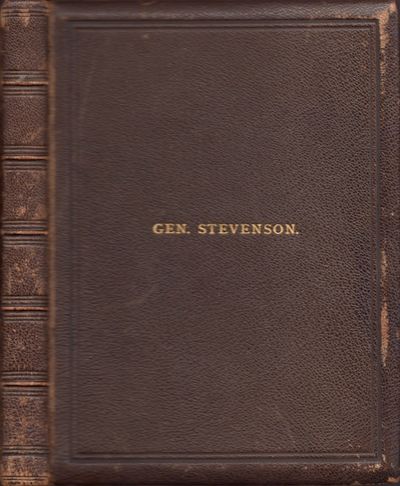 by [J. Thomas Stevenson?] [ General Thomas Greely Stevenson]
Cambridge, Mass: Welch, Bigelow, & Co, 1864. First Edition. Hardcover. Very good. Octavo. 129 pages, [1]. Illustrated with a mounted CDV (Carte-de-visite) photograph portrait of General Stevenson in uniform. Pebble grain brown morocco leather binding ruled in blind on the covers. 5 raised bands on the spine. "Gen. Stevenson" lettered in gilt on the front cover. Gilt doublure (inner ornamental linings) inside the leather covers, gilt board edges and gilt text edges. Reddish marbled end papers. No title page - as issued?. Frontispiece CDV and protective tissue pulling loose from the binding. Light rubs to the leather on the edges and spine. Inscribed by the presumed author (father of General Stevenson) on the front blank end paper - "J. O. Sawin with the regards of J. Tho' Stevenson." Laid next to the inscription is a loose dues receipt from the Woman's Relief Corps with the name of Mary E. Sawin and the date May 25, 1920. Although the author's name is not provided the signed inscription, various intimate details on Stevenson's life, and letters and tributes addressed to J. Thomas Stevenson in the book makes it quite possible this Memoir was a project completed by his father. On page 1 the writer records, "Thomas Greely Stevenson, the second child and elder son of J. Thomas and Hannah Hooper Stevenson, was born at Boston on the third day of February, A. D. 1836." The first 46 pages cover Stevenson's life and service in the Civil War up to May, 1864 when General Stevenson was shot and killed at Spottsylvania Court House, Va. The remaining pages are letters and tributes addressed to J. Thomas Stevenson after his son's death by General Burnside, fellow soldiers, Regiments, various newspapers, etc. Included with the book is an 8" x 5" broadside poem titled, "On the Death of Brigadier General Thomas C. Stevenson, Killed at Spottsylvania Court House, Va., on Tuesday morning, May 10th, 1864" by Mrs. C. M. Sawyer. Broadside is toned at the top edge with light creases and edge wear. Scarce. Not in Nevins. OCLC locates 3 copies (Newberry, West Point, and Bibliomation, Inc.). From find a grave dot com: Civil War Union Brigadier General. A pre-Civil War Massachusetts Militia officer, he was Major of the 4th Massachusetts Militia Infantry Battalion at the outbreak of the conflict. When it became apparent that the conflict would not be over quickly, he was detailed to raise a regiment, which became the 24th Massachusetts Volunteer Infantry (its core was the men from his old militia battalion). Commissioned its Colonel and commander, he led his men in 1862 operations in North Carolina. His unit participated in the capture of Roanoke Island and New Bern, and the lifting of the siege at Washington, North Carolina. Advanced to brigade commander, he led his new command in the operations against Kingston and Goldsboro. Promoted to Brigadier General, US Volunteers on December 24, 1862, his commission was not acted upon by Congress, and it expired by law. However, he was reappointed Brigadier General, and in April 1863 it was duly confirmed. He directed his brigade (designated the Third Brigade, Terry's Corps) in the Union siege and attempt to invest Charleston, South Carolina (his men stood in reserve as the assaults on Battery Wagner were attempted and repulsed). His time in the swamplands of South Carolina brought him a severe case of malaria, which forced him to go on extended sick leave in the Winter of 1863 to 1864. When he recovered sufficiently enough to resume field command, he was given command of the Firs Division in Maj. General Ambrose Burnside's independent IX Corps, which was attached to the Army of the Potomac in the Spring of 1864. During the May 1864 operations against Confederate positions at Spottsylvania County House, Virginia, he has his division placed in entrenchments along the Ni River near the Gayle House. On the morning of May 10, while conferring with fellow officers, he was shot in the back of his head by a Confederate sharpshooter and instantly killed. His younger brother, Robert Hooper Stevenson, served as Lieutenant Colonel of the 24th Massachusetts Infantry, and was brevetted Brigadier General for his war service. Fort Stevenson on the Missouri River in North Dakota was named in his honor. Today the region, lying on the shores of Lake Sakakawea, is known as Fort Stevenson State Park. A sculptor of him exists today in the Massachusetts State House. Bio by: Russ Dodge. (Inventory #: 18547)
$750.00 add to cart or Buy Direct from Americana Books
Share this item

Maryland During The English Civil Wars. Part I and Part II