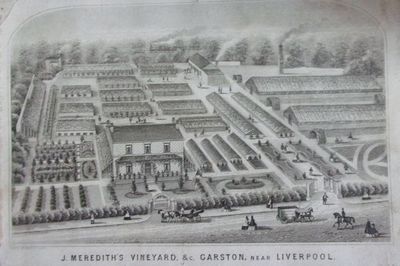 by MEREDITH, Joseph
(WINE-TRADE CARD) MEREDITH, Joseph. Trade Card for Joseph Meredith, Horticultural Architect and Builder, at Garston, near Liverpool. (N.P.: n.d. circa 1870.) Trade card (7 x 4 3/4 inches). A large horticultural trade card with image of the vineyard nursery Meredith created on one side and an advertisement for his trades on the other. A handsome card for Joseph Meredith, whose company grew grape vines "of the choicest quality for forcing in pots & general planting," as well as "plants suitable for ornamental grounds, kitchens, gardens, &c." The business flourished in the mid-19th century, won prizes at the Royal Horticultural Show in 1864 but appears to have gone into liquidation in 1875. Afterwards railway cottages were built on the site in Garston, identified by the street name "Vineyard Street." Joseph Meredith went on to write his Treatise on the Grapevine, published in 1876. Some wear. Apparently once mounted in a scrapbook with some light and clear glue residue on the text side, else very good. (Inventory #: 40538)
$385.00 add to cart Available from Bookpress
Share this item