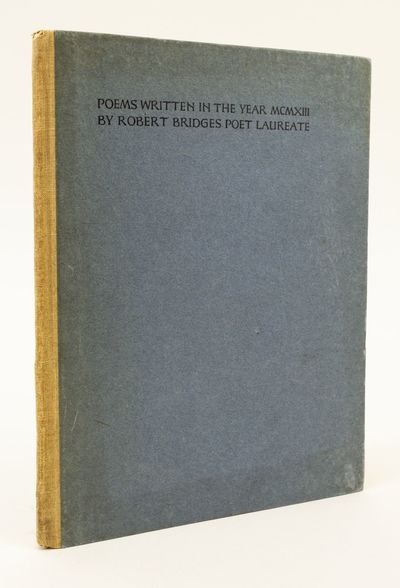 by (ASHENDENE PRESS). BRIDGES, ROBERT
Chelsea: Ashendene Press, 1914. FIRST EDITION. ONE OF 85 COPIES ON PAPER (and six on vellum), none of them for sale. 220 x 182 mm. (8 3/4 x 6 3/8"). 2 p.l. (first blank), 20 pp. FIRST EDITION. ONE OF 85 COPIES ON PAPER (and six on vellum), none of them for sale. Original holland-backed blue paper boards. Hand-painted initials in red or blue. Three lines printed in red. Hornby 28; Franklin, p. 239. Boards a little soiled, tiny chip to head of spine, a few faint spots of foxing, but an excellent copy, clean, fresh, and bright, its fragile original binding entirely solid.xxxx phil needs to see. One of 40 memorably beautiful Ashendene Press books issued between 1895 and 1935, this is a collection of poems composed during the year Bridges was named Poet Laureate. Bridges (1844-1930) had written verse since childhood, and he continued to do so while studying and practicing medicine, with his first volume of verse appearing in 1873. Day says he "is probably the master in English of a serene classic style," and notes the poet's lifelong "fervid interest" in "high-quality printing of books," a taste that no doubt drew him to St. John Hornby's Ashendene Press. During the period when the present item was in production, Bridges had written to Hornby several times. "I hope that you will not think the little poems unworthy of your press," he said in a letter dated 18-19 November 1914. "One cannot estimate one's own work very surely, but I am willing to be judged by these poems, and am anxious to print them." Hornby set the type for the text with his own hands and issued the work for private circulation only, supplying Bridges with 50 copies and keeping the rest for himself. The last book published before a six-year hiatus at the press because of World War I, this printing constituted the first appearance of these poems in book form, and the present item comprises the only literary first printing of significance done at the Ashendene Press. (Inventory #: ST15816-19)
$3900.00 add to cart or Buy Direct from
Phillip J. Pirages Fine Books
Share this item