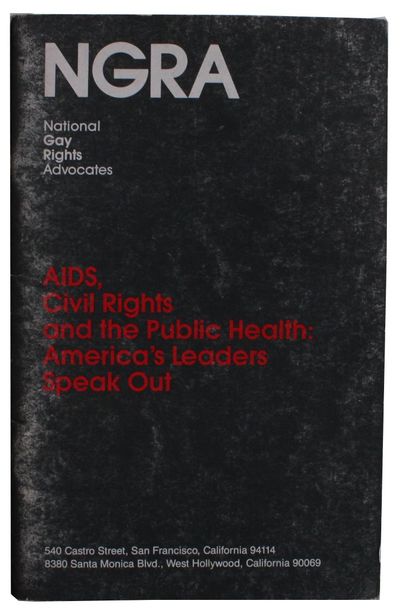 San Francisco and West Hollywood, California: National Gay Rights Advocates, 1988. Very good. First edition stated. 8 ½" x 5 ½". Stapled card wrappers. pp. [2], 32, [2]. Very good: wrappers dust soiled and heavily rubbed, internally fine. The National Gay Rights Advocates ("NGRA") was founded in 1978 and was the first public interest law firm for lesbians and gay men in the United States. By the time of this publication, it was active in every state in the country advocating in the areas of AIDS, employment discrimination, freedom of speech and domestic partnerships. This book is a product of the group's AIDS Civil Rights project, which started in 1985, and provided educational outreach in addition to its activism through the court system. This book contained a number of statements decrying discrimination based on AIDS from leaders across a broad spectrum. NGRA "hope[d] that the statements will convince employers, government officials and others to abandon policies which are discriminatory or repressive. And we hope that you, the reader, will take these statements to your union hall, your board room, your church or synagogue, and your elected officials. We urge you to demand that they take a leadership role in the fight against AIDS." OCLC locates one copy, in the Netherlands. This is a separate publication from the NGRA's "AIDS Practice Manual: A Legal and Educational Guide" which was issued the same year and held by over 100 institutions. (Inventory #: 3460)
$125.00 add to cart or Buy Direct from
Langdon Manor Books
Share this item