Album of 132 Photographs showing Scenery from Western American National Parks, with Many Realphoto Postcards by Noted Photographers including Blackfeet Photographs by T.J. Hileman 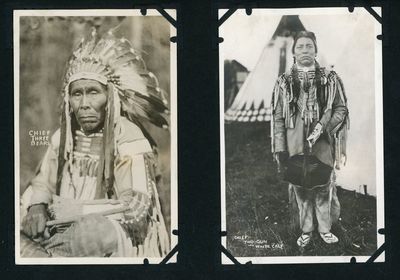 by [Western Americana] [National Parks] [Blackfeet] Hileman, T.J.; Haynes, Frank J.; Jacobs, Frank, et al.
Various Places, 1920. Oblong folio, cloth over cardstock, 15 x 11 inches. Photographs and realphoto postcards, most measuring around 5 x 3 1/2 inches, mounted to pages. The system of national parks was created at first in a somewhat piecemeal fashion, with the Department of the Interior holding responsibility for establishing each park individually. Chief White Calf of the Blackfeet famously negotiated the sale of the bulk of the lands that would form Glacier National Park in 1895, with the agreement being that the US Government would allow for Blackfoot hunting (Chief White Calf's son, Chief Two Guns White Calf, would later travel to Washington in protest of the government's subsequent actions). The establishment of the National Park Service in 1916 coincided roughly with the dawn of American motor tourism.

This album dates from that early period of National Park recreation, and bears evidence as to the recreation that happened around the early part of the century. The album shows scenery in three national parks by noted photographers, including some iconic photographs of Yellowstone by Frank J. Haynes first taken in the and several scarce images of Blackfoot attributed to the noted photographer T.J. Hileman, who was the official photographer of Glacier National Park during this period. The album begins with twenty-eight photographs by Haynes, who printed copies of his classic Yellowstone photographs, first taken in the 1890s, from his St. Paul, Minnesota studio. The next group shows twenty realphoto postcards of Mt. Rainier National Wilderness Area, taken by Frank Jacobs. Some images show the architecture of the lodges, some of which were later designated as national landmarks due to their exemplification of National Park Service rustic-style architecture. Surrounding these images are a series of photographs, presumably of the family responsible for the album, showing a young family picnicking beside their automobile. This section also includes, interestingly, a realphoto Christmas Card from Mr. and Mrs. Mark Frederick Jukes. Jukes was a notable photographer based in Elko, Nevada during this period.

The next section, which represents the most uncommon images in the album, shows a series of images of Glacier National Park. The group includes ten realphoto postcards by or attributed to T.J. Hileman, some with his copyright mark, who was at that time the park's staff photographer, and famously took photographs of the Blackfoot people living in the eastern portion of the park. Included are two portraits of Two Guns White Calf and a portrait of Chief Three Bears, neither of which we find records of in the trade. Following the Hileman images are twenty-one images taken by Fred Kiser of Glacier National Park, each measuring 3 x 3 ⅝ inches, showing captioned scenes throughout Glacier National Park in Kiser's distinctive cursive writing. Kiser began photographing western mountain landscapes on his own in 1905 following the death of his brother, and his photographs of Glacier and its environs were reproduced during the park's early days. Eight amateur photographs follow, showing camping scenes in an unidentified Western landscape. The remainder of the album - 29 pictures - show the family at home, and are most notable for a series of white children dressed up in faux- American Indian costumes.

Overall a somewhat extensive and iconic representation of early automobile-age Western travel, with the grand western scenery and zeitgeist of the time on full display. Images generally in fine condition with a few stray creases, album with some light normal wear.

Specializing in Graphic and archival Americana, photography, American history, with an emphasis on cultural and social history.

Four Photographs of Students of the Lincoln Institute

Jefferson City : S. Winans, Photographer , 1870
(click for more details about Four Photographs of Students of the Lincoln Institute)
View all from this seller>