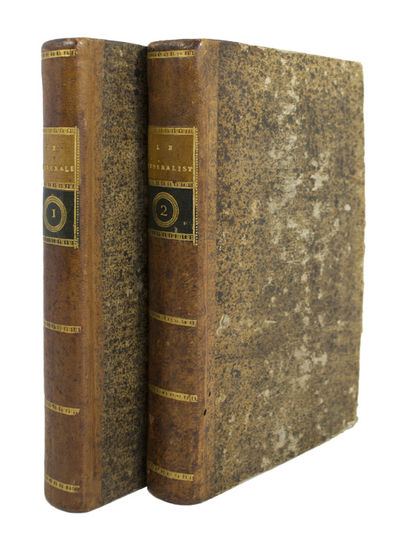 by HAMILTON, Alexander
The First French Edition of the "Federalist Papersî HAMILTON, Alexander. JAY, John. MADISON, James. Le FÈdÈraliste, ou Collection de quelques Ecrits en faveur de la Constitution proposÈe aux …tats-Unis de líAmÈrique, par la Convention convoquÈe en 1787. PubliÈs dans Les …tats-Unis de líAmÈrique par MM. Hamilton, Madisson et Gay [sic], Citoyens de lí…tat de New-York. Paris: Chez Buisson, 1792. First edition in French, the supposed second issue (without the introduction, as issued). However, Sabin states that the supposed first issue and this issue are, in all probability, the same edition. This is also the second edition overall (preceding other American editions besides the first, and any London editions). Two octavo volumes (7 9/16 x 4 7/8 inches; 192 x 123 mm). [5], xxii-lii, [1]-366 pp.; [4], [1]-511, [1, blank] pp. The preliminary pages contain the Constitution. Speckled quarter sheep-skin over speckled paste paper boards. Spines stamped in gilt. Each volume with a tan and dark green morocco spine label, lettered in gilt. All edges dyed yellow. Green silk page-markers in each volume. Boards a bit rubbed and corners bumped. Two small worm holes to front joint fo volume II. Overall a very good, internally clean copy. ìBoth issues of the first French edition are of the utmost rarity. I have heard of but one example of the first issue, the imperfect copy in the library of Harvard College, referred to by Mr. Dawson. The second is almost equally rare. There is one copy in the New York State Library (mentioned by Mr. Dawson), another in the library of Yale College, and a third was sold at auction not long since.î Mr. Lodgeís Introduction to the Federalist. The two issues "are identical as to matter and composition, with the exception of the introduction, which is omitted in the second. Translated by Trudaine de la Sabliere, who added an Introduction, and Notes, most of which are merely explanatory of such parts of the text as would be unintelligible to the French reader" (Bibliotheca Hamiltoniana: A List of Books Written By, Or Relating to Alexander Hamilton. By Paul Leicester Ford, #18). ìWhen Alexander Hamilton invited his fellow New Yorker John Jay and James Madison, a Virginian, to join him in writing the series of essays published as The Federalist, it was to meet the immediate need of convincing the reluctant New York State electorate of the necessity of ratifying the newly proposed Constitution of the United States. The eighty-five essays, under the pseudonym ëPubliusí, were designed as political propaganda, not as a treatise of political philosophy. In spite of this The Federalist survives as one of the new nationís most important contributions to the theory of government...The first number of The Federalist appeared on 27 October 1787 in The Independent Journal, or The General Advertiser and newspaper publication continued in this and three other papers, The New York Packet, The Daily Advertiser, and The New York Journal and Daily Patriotic Register, through number 77, 2 April 1788. The first thirty-six essays were published in book form on 22 March 1788 by J. and A. McLean of New York and a second volume containing essays 37-85 followed on 28 May. Thus numbers 78-85 were published in book form before they appeared in the popular pressî (Printing and the Mind of Man, about the first edition). Sabin 23993. Bibliotheca Hamiltoniana, Paul Leicester Ford, 18. PMM 234 (First edition) HBS 68284. $6,500 (Inventory #: 68284)
$6,500.00 add to cart Available from
Heritage Book Shop
Share this item

Inquiry into the Nature and Causes of the Wealth of Nations

London : Printed for W. Strahan; and T. Cadell , 1778
(click for more details about Inquiry into the Nature and Causes of the Wealth of Nations)

London : Bradbury & Evans, Whitefriars , 1850
(click for more details about Personal History of David Copperfield)
View all from this seller>