Atala; or the love and constancy of two savages in the desert. Translated from the French ... by Caleb Bingham 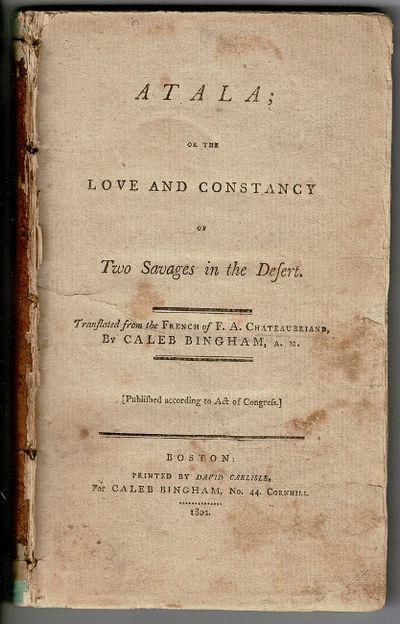 by Chateaubriand, FranÃ§ois-RenÃ©
Boston: printed by David Carlisle, for Caleb Bingham, no. 44 Cornhill, 1802. First American edition, 12mo, pp. [5], 6-177, [1]; removed from binding; first 2 leaves with neat reinforcement at the fore-edge, some foxing, otherwise good and sound. Bingham was a pioneer writer of school textbooks, among them the popular The American Preceptor, The Columbian Orator, and The Young Lady's Accidence. A translation of Atala, ou Les Amours de deux sauvages dans le dÃ©sert, an early novella by Chateaubriand concerning the American Indian. The work, inspired by his travels in North America, had an immense impact on early Romanticism, and went through five editions in its first year. Apparently, this is Chateaubriand's first appearance in America. American Imprints 2015. Sabin 12240. (Inventory #: 55696)
$287.50 add to cart or Buy Direct from
Rulon-Miller Books
Share this item