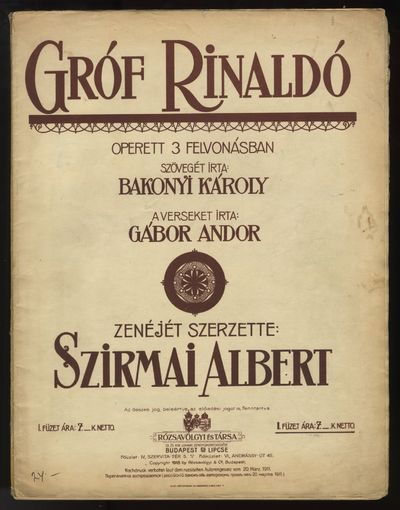 Wrappers slightly worn and soiled; minor fraying to spines; spine to vol. 1 reinforced with clear tape. Former owner's name and markings in green and red pencil to vol. 1; price in ink to lower left of title of vol. 2. Some edges frayed; occasional creasing to corners. Gróf Rinaldó, to a libretto by Károly Bakonyi and Andor Gábor, premiered at the Király Theatre in Budapest on November 7, 1918.

Szirmai premiered his first operetta, A sárga dominó, in 1907, and went on to pen nearly twenty of these popular works in his lifetime. After moving to New York City in 1926, he served as music director to the publisher Chappell.

"Szirmai belonged, with Kálmán and Jacobi, to the trio of composers who at the beginning of the 20th century raised Hungarian operetta to international status. He was influenced chiefly by the music of Schumann and Mendelssohn. From the former he learnt depth of expression, from the latter elegant lightness of touch. The influence of German Romanticism was combined in his operettas with those of Hungarian popular music and the French chanson of the turn of the century. The resulting idiosyncrasy of style remained even in his late works: jazz was not reflected in his music, although in America he was one of Gershwin's best friends and the editor of his musical estate, as well as music editor to such leading composers of shows as Kern, Porter and Rodgers." Ferenc Bónis in Grove Music Online. (Inventory #: 32198)
$55.00 add to cart or Buy Direct from
J. & J. Lubrano Music Antiquarians
Share this item