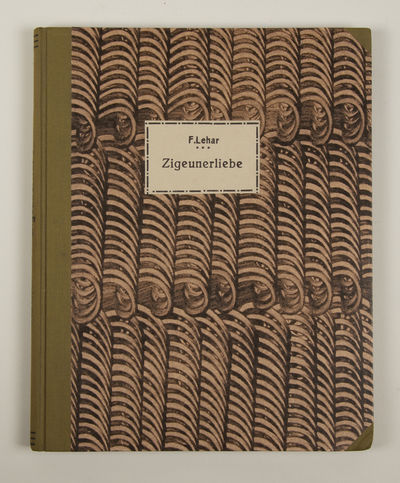 With Breitkopf & Härtel, New York, copyright date of 1909 to foot of upper wrapper and 1908 to foot of title. With performance annotations in German throughout and markings in red and lead pencil.

Lehár's operetta Zigeunerliebe was composed to a libretto by A. M. Willner and Robert Bodanzky. It was first performed at the Carltheater in Vienna on January 8, 1910.

"With [Zigeunerliebe] he brought out the full Magyar side of his musical nature: his melodies sounded like old folk-songs, and breathed like sad, beautiful fairy-tales the great melancholy of the Hungarian countryside." Grun: Gold and Silver, p. 161.

"[Lehár] was the leading operetta composer of the 20th century, being primarily responsible for giving the genre renewed vitality. His most successful operetta, Die lustige Witwe, has established a lasting place in the opera as well as the operetta repertory and, along with Offenbach and Johann Strauss II, Lehár has remained one of the most popular composers of light music." Andrew Lamb in Grove Music Online. (Inventory #: 32116)
$94.00 add to cart or Buy Direct from
J. & J. Lubrano Music Antiquarians
Share this item