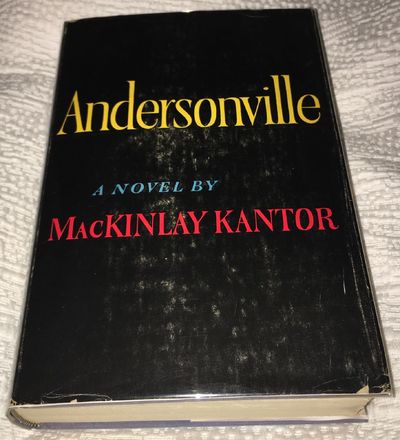 by Kantor, MacKinlay
New York and Cleveland: World, 1955. First edition. Hardcover. A very good copy in powder blue cloth with sunning around the edges in a very good plus dust jacket with minor wear to extremities with some rubbing to the front cover. The novel won the Pulitzer Prize for Fiction. The book interweaves the stories of real and fictional characters. It is told from many points of view, including that of Henry Wirz, the camp commandant, who was later executed. It also features William Collins, a Union soldier and one of the leaders of the "Raiders". The "Raiders" are a gang of thugs, mainly bounty jumpers who steal from their fellow prisoners and lead comfortable lives while other prisoners die of starvation and disease. Other characters include numerous ordinary prisoners of war, the camp physician/doctor, a nearby plantation owner, guards and Confederate civilians in the area near the prison. (Inventory #: 14385)
$300.00 add to cart or Buy Direct from Ed Smith Books
Share this item