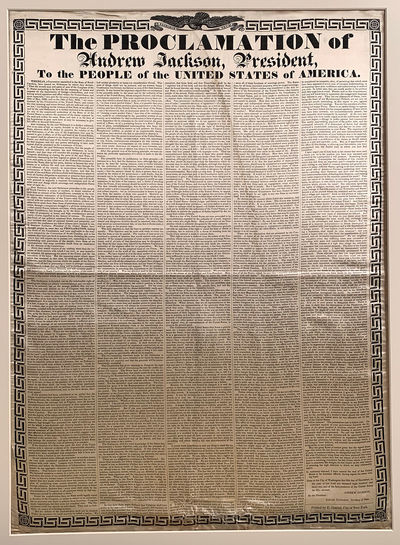 by ANDREW JACKSON
ANDREW JACKSON.
Broadside. The Proclamation of Andrew Jackson, President To the People of the United States. New York: E. Conrad, [1832]. Large broadside on silk, text in 5 columns, surrounded by an ornamental border. 20½ x 29 in. 1 p.
Excerpt:

"I consider then the power to annul a law of the United States, assumed by one State, incompatible with the existence of the Union, contradicted expressly by the letter of the Constitution unauthorized by it's spirit, inconsistent with every principle on which it was founded, and destructive of the great object for which it was formed …"

Drafted by Secretary of State Edward Livingston, but infused with the President's Unionist principles and unyielding resolve, Jackson's Proclamation was the most important statement of constitutional principles in the first half of the nineteenth century.

On November 25, 1832, South Carolina passed an Ordinance of Nullification declaring the congressional tariffs of 1828 and 1832 to be in violation of the Constitution, and therefore null and void. Jackson's December 10, 1832 address declared South Carolina's action to be treasonous, and threatened military force in response.

A compromise tariff would be negotiated to settle the dispute and the Ordinance of Nullification was repealed by South Carolina on March 11, 1833.

"Jackson's famous proclamation in which he denounced nullification as treason and told the people of South Carolina in no uncertain terms that he proposed to enforce the laws of the United States" (Streeter). Sabin 35352.

The first broadsides of this Proclamation were printed in Washington D.C., on paper. Other states, including New York, Philadelphia, Hartford and Boston followed on either paper or silk, as is the present example.

Minor fraying at the top and bottom margins, very light dampstaining, minor areas of splits of pin holes, evidence of prior mounting along at top and bottom on verso. (Inventory #: 21418.99)
$3,000.00 add to cart Available from Seth Kaller
Share this item