The wedding days of former times 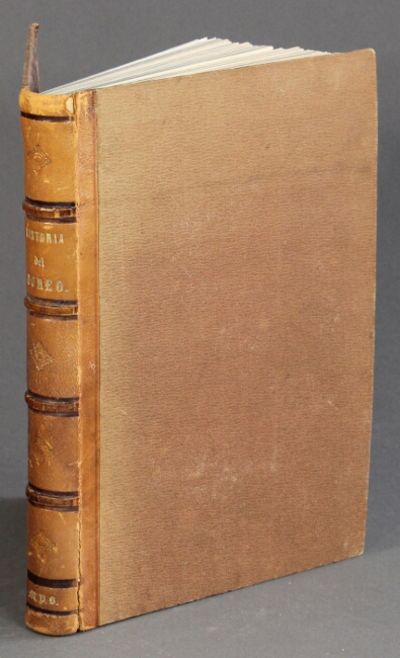 by Hunt, Thomas P., the drunkard's friend
Philadelphia: Griffith & Simon, 188 North Third Street. New York - Saxton & Miles, 1845. First edition, 16mo, pp. 87, [1]; 6 lithograph plates by Wagner & McGuigan; original brown blindstamped cloth, gilt-lettered on upper cover; moderate foxing throughout (but not the plates), one central gathering extended, last leaf miscreased; all else very good. The Rev. Hunt, a radical reformer seeking temperance at all levels, wrote three books in 1845, all published by Griffith & Simon, and all espousing total abstinence. "The writer of these volumes endeavors to persuade all men every where to embrace the doctrine of total abstinence, and certes, if he succeeds, there will be no drunkards. He has done much to rescue the slaves of strong drink ... and has earned the title of 'The Drunkard's Friend.' His D.F. is worth more than a D.D. So long as the advocates of total abstinence contend for the principle, on the grounds of expediency, we believe the argument to be sound and scriptural ... On the other hand to argue that the use of wine is in itself sinful is to assume a position which cannot be successfully maintained: 'For the Kingdom of God consisteth not in meat and drink'. (from a review in The Protestant Quarterly, vol. IV, no. 1, January, 1847, p. 95). American Imprints 3350; Wright I, 1246. (Inventory #: 55789)
$230.00 add to cart or Buy Direct from
Rulon-Miller Books
Share this item

The agricultural register, for the years 1806 and 1807. Containing practical information on husbandry; cautions and directions for the preservation of health, management of the sick, etc.

Boston : printed by Manning & Loring , 1807
(click for more details about The agricultural register, for the years 1806 and 1807. Containing practical information on husbandry; cautions and directions for the preservation of health, management of the sick, etc.)
View all from this seller>