AN APOLOGY FOR THE TRUE CHRISTIAN DIVINITY, BEING AN EXPLANATION AND VINDICATION OF THE PRINCIPLES AND DOCTRINES OF THE PEOPLE CALLED QUAKERS 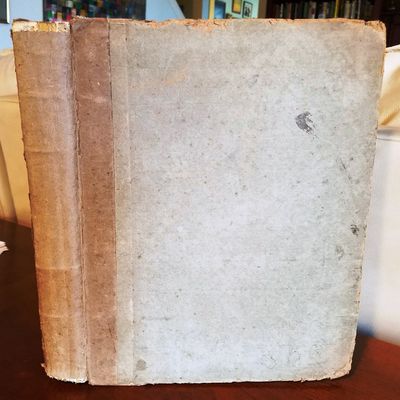 by (BASKERVILLE PRESS) BARCLAY, Robert
Birmingham: John Baskerville, 1765. First Edition. Hardcover. Old bookseller description pasted to the top of the front pastedown which has evidence of a bookplate removal; ink number "5196" at the top corner of the verso of the front endpaper; mild spotting toward the beginning but mostly very clean. Light wear along spine edges and tips, no spine label present or evidence there was one; light wear to corners and top edge. Near Fine. The First Baskerville Edition and the Eighth overall. Quarto (9-7/8" x 12-1/2") bound in original blue paper-covered boards with light green paper backing, uncut and mostly unopened; [12], [ii]-xiii, [2], 504, [18] pages. Gaskell 30 describes that the errata leaf is frequently missing. This copy has two examples of the errata leaf, one with a Phillips & Fardon imprint as part of the preliminaries and the other at the end of the text without an imprint. DICTIONARY OF NATIONAL BIOGRAPHY: "Barclay's great book, The Apology, is remarkable as the standard exposition of the principles of his sect, and is not only the first defense of those principles by a man of trained intelligence, but in many respects one of the most impressive theological writings of the century." (Inventory #: 019815)
$1,500.00 add to cart or Buy Direct from Charles Agvent
Share this item

THE FALL OF THE CITY. A Verse Play for Radio

New York & Toronto : Farrar & Rinehart, Inc. , (1937)
(click for more details about THE FALL OF THE CITY. A Verse Play for Radio)
View all from this seller>