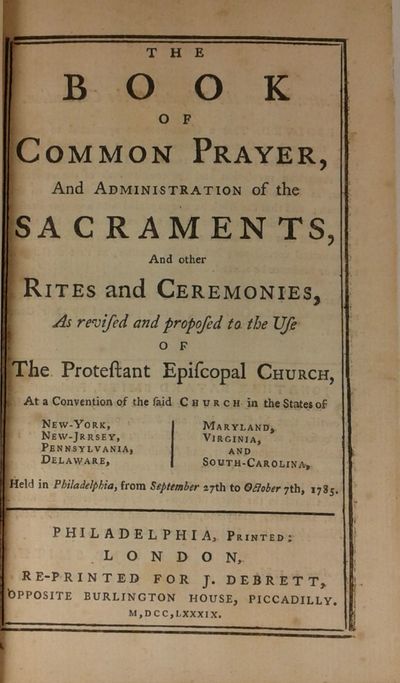 by Episcopal Church
1789. (AMERICAN BOOK OF COMMON PRAYER). Episcopal Church. The Book of Common Prayer, and Administration of the Sacraments, and other Rites and Ceremonies, as Revised and Proposed to the Use of the Protestant Episcopal Church, at a Convention ... Held in Philadelphia ... 1785. Philadelphia, printed; London: Reprinted for J. Debrett, 1789. 12mo. [364] p. Later half calf, worn, with sound modern rebacking in non-matching leather. Library bookplate on pastedown else entirely unmarked. A clean, tight copy in a slightly artless but entirely serviceable binding. The English reprint of the first American Book of Common Prayer as proposed by the newly-formed convention of the Protestant Episcopal churches in America. There is a long tradition that only fifty copies of this edition were printed. The source for this statement is found in the Historical Magazine I (1857), p. 221, in a footnote to a list of pre-1800 American editions of the BOCP: "The only copy of this I have ever seen was in the library of the Rev. Wm. B. Stevens, D.D., of Philadelphia, and contains immediately under the book-plate of one of the English nobility from whose collection it originally came, the manuscript note that only fifty copies were published--probably for the use of the English bishops who were then considering the request of the American Church for the 'succession.'" Griffiths 1789/8 states "Only fifty copies printed. ESTC T161150. (Inventory #: 15449)
$2,800.00 add to cart or Buy Direct from
Joseph J. Felcone
Share this item
Joseph J. Felcone Inc.
Offered by

Juvenile Poems on Various Subjects. With the Prince of Parthia, a.

1765
(click for more details about Juvenile Poems on Various Subjects. With the Prince of Parthia, a.)

1794
(click for more details about Book of Common Prayer ... According to the Use of the Protestant)
View all from this seller>