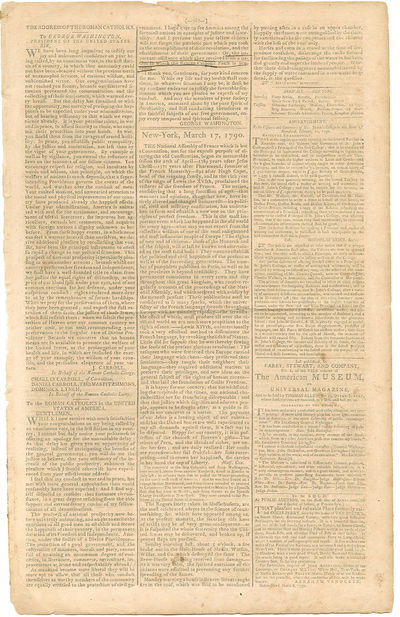 by [GEORGE WASHINGTON]
"The prospect of national prosperity now before us is truly animating, and ought to excite the exertions of all good men to establish and secure the happiness of their Country, in the permanent duration of its Freedom and Independence. America, under the smiles of a Divine Providence—the protection of a good Government—and the cultivation of manners, morals and piety, cannot fail of attaining an uncommon degree of eminence, in literature, commerce, agriculture, improvements at home and respectability abroad." [GEORGE WASHINGTON].
Newspaper. The Gazette of the United States, March 17, 1790. Pages 3-4 only (of 4 pages).

To the Roman Catholics in the United States of America.

While I now receive with much satisfaction your congratulations on my being called, by an unanimous vote, to the first station in my Country; I cannot but duly notice your politeness in offering an apology for the unavoidable delay. As that delay has given you an opportunity of realizing, instead of anticipating, the benefits of the general Government; you will do me the justice to believe, that your testimony of the increase of the public prosperity, enhances the pleasure which I should otherwise have experienced from your affectionate address.

I feel that my conduct, in war and in peace, has met with more general approbation than could reasonably have been expected: and I find myself disposed to consider that fortunate circumstance, in a great degree, resulting from the able support and extraordinary candour of my fellow-citizens of all denominations.

The prospect of national prosperity now before us is truly animating, and ought to excite the exertions of all good men to establish and secure the happiness of their Country, in the permanent duration of its Freedom and Independence. America, under the smiles of a Divine Providence—the protection of a good Government—and the cultivation of manners, morals and piety, cannot fail of attaining an uncommon degree of eminence, in literature, commerce, agriculture, improvements at home and respectability abroad.

As mankind become more liberal they will be more apt to allow, that all those who conduct themselves as worthy members of the Community are equally entitled to the protection of civil Government. I hope ever to see America among the foremost nations in examples of justice and liberality. And I presume that your fellow-citizens will not forget the patriotic part which you took in the accomplishment of their Revolution, and the establishment of their Government: or the important assistance which they received from a nation in which the Roman Catholic faith is professed.

I thank you, Gentlemen, for your kind concern for me. While my life and my health shall continue, in whatever situation I may he, it shall be my constant endeavour to justify the favourable sentiments which you are pleased to express of my conduct. And may the members of your Society in America, animated alone by the pure spirit of Christianity, and still conducting themselves as the faithful subjects of our free Government, enjoy every temporal and spiritual felicity.

"You encourage respect for religion, and inculcate...that principle, on which the welfare of nations so much depends, that a superintending Providence governs the events of the world, and watches over the conduct of men. Your exalted maxims and unwearied attention to the moral and physical improvement of our country have produced already the happiest effects.... From these happy events, in which none can feel a warmer interest than ourselves, we derive additional pleasure by recollecting, that you, Sir, have been the principal instrument to effect so rapid a change in our political situation. This prospect of national prosperity is peculiarly pleasing to us on another account; because whilst our country preserves her freedom and independence, we shall have a well founded title to claim from her justice the equal rights of citizenship, as the price of our blood spilt under your eyes, and of our common exertions for her defence, under your auspicious conduct, rights rendered more dear to us by the remembrance of former hardships. When we pray for the preservation of them, where they have been granted; and expect the full extension of them from the justice of those States, which still restrict them; when we solicit the protection of Heaven over our common country: we neither omit or can omit recommending your preservation to the singular care of divine providence; because we conceive that no human means are so available to promote the welfare of the united States, as the prolongation of your health and life, in which are included the energy of your example, the wisdom of your counsels, and the persuasive eloquence of your virtues."

Also with reports on the French Revolution (p. 3, col. 2), news of painter John Trumbull, reports of celebrations of Washington's birthday across the nation, notes on agriculture and manufactures, an article from Paris about "Negro Deputies in the National Assembly," and a New York lottery to raise money to repair City Hall (p. 4). A lengthy editorial is copied on p3 from the Massachusetts Centinel: "It is happy for our country, that notwithstanding the turpitude of the times, our national characteristics are far from being disreputable: and that that justice which dignifies and adorns a people, appears to be sought after, as a guide to direct in our concerns as a nation. The payment of our debts is a leading object of our rulers— and that the United States are well capacitated to pay all demands against them, is a fact not to be disputed…. Her coasts are extensive—her soil fruitful—her sons enterprising—and to crown her happiness, she carries in her hand the cap of Liberty."

The Protestant-dominated colonies (all but Maryland) were often hostile to Catholics, outlawing their churches and restricting their civil rights. Starting in the 18th century, government and military officials in Virginia were required to sign oaths denying key Catholic teachings; this oath rejected the belief in transubstantiation, or the changing of bread and wine into the body and blood of Christ. We can speculate that Washington's distaste for his home state's history of discrimination contributed to his opposition to religious bigotry.

The National Assembly of France which is but a Convention, met for the express purpose of altering the old Constitution, began its memorable session the 27th of April—1789 years after Jesus Christ—1371 years after Pharamoud, founder of the French Monarchy—892 after Hugh Capet, head of the reigning family, and in the 16th year of the reign of Lewis the XVIth, proclaimed the restorer of the freedom of France. The nation, considering that a long succession of ages—that manners and opinions, altogether new, have intirely altered and changed its interests—its political, civil and military constitution, has undertaken to form and establish a new one on the principles of perfect freedom. This is the most important event which has happened in the old world for many ages—what may we not expect from the collective wisdom of one of the most enlightened and moll influential people of Europe? The rights of men and of citizens— those of the Monarch and of the subject, will at last be known and ascertained on the most solid basis: They mean to establish the political and civil happiness of the present as well as of the succeeding generations. The number of pamphlets published in Paris, as well as in the provinces is beyond credibility. They have permanent committees in every town and city throughout this great kingdom, who receive regularly accounts of the proceedings of the National Assembly, and which are read with avidity by the meanest peasant : These publications must be considered as so many sparks, which the universality of the French language spreads throughout Europe with an amazing rapidity—the irrefutable effect of which, must produce all over the civilized world an era much more propitious to the rights of men. - Lewis XIVth, unintentionally took a very effectual method to disseminate the French language, by revoking the Edict of Nantes. Little did he suppose that he was thereby sowing the seeds of the present glorious revolution : The refugees who were scattered thro Europe carried their language with them—they preserved their sentiments—they taught their neighbors their language—they acquired additional motives to preserve their privileges, and new ideas on the general subject of the rights of human nature— and thus laid the foundation of Gallic Freedom.

It is happy for our country, that notwithstanding the turpitude of the times, our national characteristics are far from being disreputable: and that that justice which dignifies and adorns a people, appears to be sought after, as a guide to direct in our concerns as a nation. The payment of our debts is a leading object of our rulers— and that the United States are well capacitated to pay all demands against them, is a fact not to be disputed. Happy for our country, it is in possession of the choicest of Heaven's gifts—The mines of Peru, and the islands of riches, are under her feet; and are daily realized: Her coasts are extensive—her soil fruitful—her sons enterprising—and to crown her happiness, she carries in her hand the cap of Liberty. Mass Cent.

The concern'd in the ship Columbia and sloop Washington, have receiv'd letters from captain Kendrick, dated at Nootka in July last; he mentions them that he passed the Winter proceeding on the north west coast of America: that he was then bound on a voyage further Northward, and from thence intended to proceed to Canton. The letters were forwarded to Mexico by a Spanish fleet that had been at Nootka, and from thence to the Spanish Charge des affaires at New-York. They were covered to the President of the United States of America.

The Rogues lately taken in Massachusetts, are the most celebrated adepts in the science of counterfeiting, &c. which have appeared among us. At the present moment, the securing this knot of artists may be of very great consequence—as it is suspected the whole fraternity thro the United States may be discovered, and broken up, if proper steps are pursued.