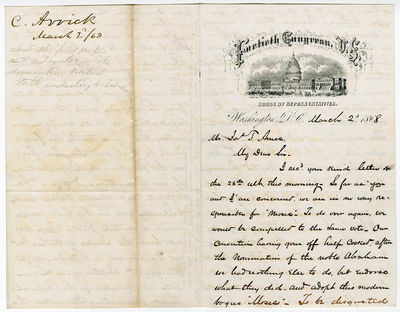 by [ANDREW JOHNSON]. CLIFFORD ARRICK
"Our Convention having gone off half cocked, after the nomination of the noble Abraham we had nothing else to do, but endorse what they did, and adopt this modern bogus 'Moses.'"

"The infliction of Andy upon us was after all a probable God Send. Mr Lincoln would have adapted himself to events probably, and his noble heart would have stopped far short of what is now, as inevitable as death."

Written on March 2, 1868, the day the House of Representatives approved the first nine articles of impeachment against President Andrew Johnson, this letter reflects on the responsibility for his 1864 nomination as vice presidential candidate and the villainy of his rule, and expresses the hope that African American voters would yet save the nation. Congressman Arrick apparently did not count on Johnson's acquittal. [ANDREW JOHNSON]. CLIFFORD ARRICK.
Autograph Letter Signed, to James T. Ames, March 2, 1868, Washington, D.C. On U.S. House of Representatives stationery. 5 pp., 5 x 8 in.

I recd your kind letter of the 28th ult. this morning. So far as "you
and I" are concerned, we are in no way responsible for "Moses." To do over again, we would be compelled to the same vote. Our Convention having gone off half cocked, after the nomination of the noble Abraham we had nothing else to do, but endorse what they did, and adopt this modern bogus "Moses." To be disgusted at him, is not to be disgusted at ourselves, or them. Besides, there is evidently a "Divinity that shapes our ends rough" in these days. Too bitterly, I do not complain of the poor instrument through whom our political regeneration was made possible. Very certainly, our best Republicans needed something to bring them up to the noble work. The infliction of Andy upon us was after all a probable God Send. Mr Lincoln would have adapted himself to events probably, and his noble heart would have stopped far short of what is now, as inevitable as death.

When by the 14th Article Congress proposed to turn over the freedpeople to rebel domination, on the condition of non representation as an offset to non franchisement, we needed an infliction. Sorely as we had been punished, this demanded another stripe. We have had it, and can we not hope now that the last "vial" has been poured upon us. If the votes of these poor and humble people shall be the means yet of saving the nation from Rebel rule and Democratic Repudiation, we shall verify in our history, that of a truth, "the first shall be last and the last first" in the Providential dispensation of our generation and age. I am hopeful that absolute crime and villainy will in this last move receive a mortal blow. Time
does not hurt the Cause of truth. And as the Caucus of Saturday night designated Butler and Logan both as members of the Impeachment Prosecuting Committee, the Ord business will be bereft of their help for some weeks hence. The three Senators being also implicated we have only one left, Mr. Schenk, and he has taken no part in the matter since I came on the Carpet we are really minus a mouth piece. My impressions however are, that even this state of things will prove of advantage, as it will in some measure leave your humble servant "monarch of all he surveys." Matters were approaching that result at any rate, and as I think for the better. I am sorry indeed that I cannot bring greater ability to the work before me. Still I trust and hope that my friends will not be altogether disappointed, and that even the awkward licks I am able to give will be "sufficient for the day" and "the evil thereof."

I have made no movement at the other end of the Avenue. I have felt that the Secretarys position did not warrant it, and hence have not visited Mr. Hooper. I have a very elaborate report prepared for the Committee, and can I think, have it adopted just as it is, and sent in, and to the Country, in a few days. Under present excitements this may not be advisable, but we will see. Of course I should much like to have your company and advice at these headquarters, and if you can content yourself, to do so, and fell that to escape the "Rough March Winds" of Massachusetts you would be justified in it, come along and stay with us for a month or so.

These are times in American history, and as I think, American business, so who knows how good a thing it might be, to be around just now, besides if your health and comfort would be benefited, as I have little doubt it would, that will be pay enough.

I am really glad that you have "lost" Sarah as you call it, the change being in all probability greatly for the better. If she meets with no accident on her journey, it is almost certain that she will return to you with new and bright hopes. Although I was not consulted, she has taken the very tour I would have advised. There is so much in it to animate and excite, and the climate on the Pacific will be very much as she would have it. Glorious is it indeed! If she should venture round, coming home in mid summer through northern Europe, wouldn't it be a big thing?

Hoping that I may see you before many days, I am

[In margin between pages 2 and 3:] P.S. Remember me to Mrs. A. tell her I am glad Sarah has gone and done just what she should, what every woman should, but that my best wishes for her return in good health and spirits is uppermost.

Clifford Arrick, an attorney and armaments inventor, wrote this letter to his partner James T. Ames, head of the Ames Manufacturing Company, in part responding to Ames' view that they had been partially responsible for placing Johnson on the ticket with Lincoln in 1864. During that campaign, Johnson had promised African Americans that he would be their "Moses," leading them out of bondage. When Johnson became president after Lincoln's assassination, most Republicans were appalled at how quickly Johnson pardoned former Confederates and abandoned African American southerners to fend for themselves.

Arrick also expressed his belief that the proposed 14th Amendment, rather than protect African American voting rights, would allow white southerners to disfranchise African Americans in exchange for a smaller representation in Congress and the Electoral College, a sacrifice he believed they would be willing to make.

At the time he wrote this letter, Arrick was pressing charges against Major General Alexander B. Dyer (1815-1874), the Chief of Ordnance for the U.S. Army Ordnance Corps during the Civil War. Arrick testified before a Joint House and Senate Select Committee on Ordnance that Dyer had refused to select Arrick's Eureka projectile, even though it had allegedly come in first in tests, but instead selected the Dyer-Absterdam shell that had come in last. According to the accusations, Dyer purchased nearly fifteen times more of his own shells, collaborating with Absterdam for financial gain. In this letter, Arrick notes that both Benjamin Butler (1818-1893) of Massachusetts and John A. Logan (1826-1896) of Illinois of the Joint Ordnance Committee had been appointed to the seven-member House Impeachment Committee. Since the three Senators from the committee would serve as part of the jury in the impeachment trial, only Congressman Robert C. Schenck (1809-1890) of Ohio remained, so further proceedings against Dyer would have to wait until after the impeachment trial concluded.

In May 1868, ten Confederate states had not yet been readmitted to representation in the Senate. With 54 members of the U.S. Senate, representing 27 states, the two-thirds majority required for conviction meant that 36 senators had to vote for Johnson's conviction. Believing that prosecutors had manipulated the presentation of evidence, nine Republicans and nine Democrats voted for acquittal. In a series of votes on three of the articles of impeachment, the Senate voted 35 to 19 in favor of conviction, one short of the necessary two-thirds majority.

The Joint Ordnance Committee eventually made a partial report to Congress, which charged Dyer with, in his words, "being corruptly interested in supplying ordnance to the government; with making numerous and costly experiments, since the war; with neglecting and misrepresenting useful inventions; and with mutilating and destroying the records" of his department to conceal his misdeeds. In July 1868, Dyer requested a court martial to clear his name. When that was denied, he asked for a court of inquiry. That court convened in November 1868, composed of Generals George H. Thomas, Winfield Scott Hancock, and Alfred. H. Terry, and Judge Advocate General Joseph Holt. After hearing testimony for six months, reported in a one-thousand-page printed record, the court of inquiry fully exonerated Dyer.

Fewer than two weeks before Arrick wrote this letter, Ames' daughter Sarah Tyler Ames (1845-1910) married Albert Charles Woodworth (1841-1905) on February 18, in Chicopee, Massachusetts. He worked for her father at Ames Manufacturing. Albert Woodworth assumed control of the Ames Manufacturing Company after the retirement of his father-in-law, and in 1880, the Woodworths and their two children lived in her parents household.

Clifford Arrick (1827-1875) was born in Ohio and became an attorney in eastern Ohio. In 1852, he married Josephine C. Templeton (1832-1910), with whom he had at least three children. In 1860, they moved to Washington, D.C. In October 1864, Arrick received a patent for an improved fuse for artillery projectiles. After the war, he was a lawyer in Washington, D.C. In the spring of 1875, he became the president of the Ames Manufacturing Company of Chicopee, Massachusetts. He died suddenly of apoplexy in September 1875, while on a trip to escort his daughter to Vassar College in Poughkeepsie, New York.

James T. Ames (1810-1883) was born in Massachusetts and with his brother Nathan P. Ames Jr. (1804-1847) established the Ames Manufacturing Company in Springfield, Massachusetts, in 1829. The firm originally manufactured tools and cutlery, but soon began manufacturing swords for the federal government and state militias. They moved their operations to northern Springfield in a mill village called Cabotville, which in 1848 became the separate town of Chicopee. The company made innovations based on research and experimentation and by 1844 was producing a flintlock, breech-loading carbine. In 1845, the company added an iron foundry for creating both statuary and cannon. Up until Congress banned the sale of arms to states threatening secession in January 1861, Ames sold muskets and sabers to southern militias. During the Civil War, the Ames Company supplied almost 160,000 swords to the Union Army and Navy. The company's largest single contract was for one hundred mountain howitzers, and the company was the third largest producer of heavy ordnance for the Union throughout the war. Though likely exempt from military service, Ames purchased a military substitute, a nineteen-year-old African American named Pinckney Jourdan, who served in the 38th U.S. Colored Infantry from 1864 to 1867. After the war, the ordnance division of the Ames Manufacturing Company turned to the manufacture of bicycles, sewing machines, and lighthouse equipment, but went out of business at the turn of the century. The sword division survived until the Great Depression, and eventually an Ohio regalia manufacturer purchased the firm and moved it to Ohio. (Inventory #: 26036)
$850.00 add to cart Available from Seth Kaller
Share this item