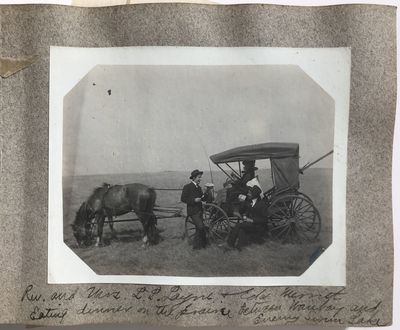 by [Western Photographica]. [South Dakota]
[Various locations in South Dakota], 1904. About very good.. Twenty-seven silver gelatin photographs and six postcards on eighteen leaves; photos 4 x 5 inches. Small album. Original black cloth, manuscript label on cover. Light wear and soiling. Some images lightly faded; most captioned in ink. Postcards a bit worn and soiled. A short but interesting album of photographs documenting life on the rural South Dakota prairie in 1904. A later caption reveals a bit of the backstory for the album: "Edward Merritt and ranch in S.D. when he and Rev. E.C. Smith had a week's vacation, 1904. Carson's Ranch," and the first images in the album are of Carson's Ranch, located about eight miles from Bradley, South Dakota. Photos include shots of the house, the family, outbuildings, and agricultural work. One photo shows two wagons back to back on an open prairie, one of them stuck in a rut. Two mules stand patiently attached to the wagon in the foreground, and the caption reads, "Wagon with 80 bu wheat in the mire in the prairie on way from Carson's Ranch to Garden City, S.D. Mr. Carson is in the wagon." During the week on holiday, the author traveled around the northeaster corner of the state, in the area between Aberdeen and Watertown. Named places include Waubay, Bradley, Garden City, and Bristol. Several images show the parsonage at Montrose, and we presume this is the home of the accompanying Rev. E.C. Smith, as Montrose is near Sioux Falls, farther south. Several images taken on the prairie show the group out in a buggy. In the first, the buggy is slightly askew with horses disconnected and passengers standing around. The caption reads, "Rev. L.L. Layne and wife & Edward Merritt after the accident crossing a bridge, near Waubay, S.D." The next photo shows the group laughing and eating pies "eating dinner on the prairie between Waubay and Enemy Swim Lake." The next two photos are blurry, alas, but both relate to local Native Americans. One shows a hole in the ground labeled "Dug out where 'Iron Star' Indian lived near Waubay, S.D.," and the second shows a cabin with a horse out front, captioned: "Residence, Indian ponies and canoe of Blue Dog, Indian, Enemy Swim Lake, Sisseton Tribe, Sioux Indians, S.D." Though not an extensive album, we nonetheless find it fascinating for its glimpse into life in rural South Dakota at the turn of the century. (Inventory #: 1259)
$450.00 add to cart Available from
McBride Rare Books
Share this item

Geary, Ok : Journal Print , 1910
(click for more details about The "Home Pride" Cook Book of the Presbyterian Church Geary, Oklahoma)
View all from this seller>