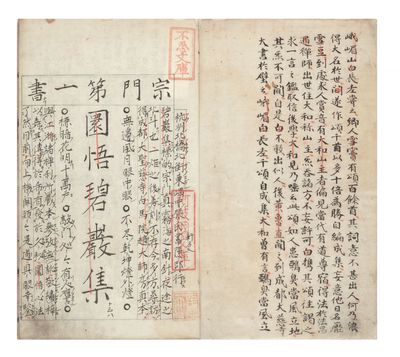 by YUANWU KEQIN (or, in Japanese: ENGO KOKUGON)
Printed in Chinese with Japanese reading marks. 11 columns per page, 21 characters per column. 79; 59; 51; 49; 67 folding leaves. Ten parts in five vols. 8vo (240 x 149 mm.), orig. brown wrappers, new stitching. [Japan]: mid-Muromachi [ca. 1440-50]. An extremely rare and important "mid-Muromachi" Gozan-ban edition of The Blue Cliff Record [in Chinese: Pi yen lu], a collection of Chan Buddhist koan. These were verbal tests, used to practice or test a student's progress in Zen, compiled in the Song Dynasty and expanded by the great Northern Song Chan master Yuanwu Keqin (1063-1135), abbot of Tianning Wanshou Chan Monastery in Beijing. The text was first printed in China in 1125 (or 1128) and has long been celebrated for both its startling beauty and profound complexity. Around 1140, one of Yuan Wu's successors, Ta Hui, destroyed the printing blocks and copies of the Pi yen lu, because the work's rapid and widespread popularity made him fear that its beauty of expression would distract its readers from seeking enlightenment directly within themselves. The text was brought back from China by Dogen (1200-53), the Japanese Buddhist priest who was a founder of the Soto school of Zen in Japan. He had studied in China for four or five years and returned to stay at the Kenninji (temple), where he introduced many texts. This text was first printed in Japan about 1336-50 (early-Nanbokucho) by Gyokuho Shorin at the Kenninji; there is a copy at the National Diet Library. Our edition is a reprint of that first Japanese edition, using the same woodblocks with minor changes. A later edition appeared in the Donald and Mary Hyde sale (lot 65). "For some time Chan monks had been in the habit of extracting snippets from the 'records' (yulu) of past masters, isolated them as 'ancient precedents,' and commenting on them, sometimes in verse, sometimes in prose. By the mid-eleventh century the core situation was known as a 'case to be investigated' or a gong'an. The process was incremental and difficult to stop. Yuanwu's Emerald Cliff Record, for example, took a previous eleventh-century collection entitled Master Xuetou's verses on a hundred old cases and added an introduction and extensive commentary to each 'case,' sometimes also dropping in comments on the appositeness, or more usually inappositeness, of the relevant verse, so becoming in his turn 'magistrate.' A gong'an collection, therefore, reveals many layers, all of them dedicated to undercutting the stability of language while at the same time playing a complex game of competing authorities. Herein lies their fascination."-Richard Bowring, The Religious Traditions of Japan (Cambridge U.P.), p. 301. "Gozan-ban is a general term embracing all those books published by monks of the Zen sect, chiefly at the five Zen monasteries at Kamakura and the five at Kyoto, over a period of more than 200 years between mid-Kamakura and late Muromachi. The appearance of the printed page in most Gozan editions follows a distinctly Chinese style. The effect is somewhat dense and crowded, caused by packing the Chinese characters tightly together with more regard for economy of space than for aesthetic effect. In this the Gozan editions differ markedly from all other early Japanese printed books, which are more generously spaced. The reasons for this are twofold: the books tend to be chiefly reprints of Chinese song and Yuan editions, and during the fourteenth century many Chinese blockcutters came over from the continent and practised their craft of a semi-commercial basis and on a fairly large scale."-K.B. Gardner, "Centres of Printing in Medieval Japan: late Heian to early Edo period" in British Library Occasional Papers 11. Japanese Studies (ed. by Yu-Ying Brown), London: 1990, p. 164. PROVENANCE: This copy has the seals of Hirokata Yashiro (1758-1841, "Shinobazu Bunko"); Awa no Kuni Bunko; and Goroza Uchino (b. 1873, "Kyotei Bunko"). It later belonged to the great collector and bibliographer of early Japanese books Kazuma Kawase (1906-99), and has his seal. The chitsu has Kawase's manuscript title label, stating (in trans.): "Gozan-ban. Hekiganroku. Mid-Muromachi edition. Shinobazu Bunko provenance. Kazuma put the title on this label," also with his seal. There are four Prefaces: the first is undated, the second dated 1300, the third dated 1305, and the fourth is dated 1304. Two leaves of manuscript, probably written by Yashiro, have been inserted at the beginning of Vol. I. They provide a commentary and a sort of title-page (the work was issued without a title). Following Part I, there are another two leaves of manuscript relating to this text. Following the tenth part, are five Afterwards, dated 1125, undated, 1302, 1317, and 1317. In fine condition, all contained in a modern wooden box. The top of the box has been covered in a most attractive silk brocade. A few natural paper flaws and minor staining. Berkeley has an edition of this text but, because of the very vague WorldCat cataloguing, it is impossible to tell which exact edition it is. ❧ Kornicki, Language, Scripts, and Chinese Texts in East Asia, p. 245. (Inventory #: 7036)
$85,000.00 add to cart or Buy Direct from
Jonathan A. Hill, Bookseller
Share this item
Jonathan A. Hill, Bookseller, Inc.
Offered by


(click for more details about [From first page]: Books by Edward Ruscha)

by WESTERN MEDICINES IN JAPAN


(click for more details about Manuscript on paper, entitled in manuscript on label on upper cover "Komo ryu mae abura [or] yu koho" ["Collection of Red-Haired Style Oil Ointments"])
View all from this seller>