Life Among the Lowbrows 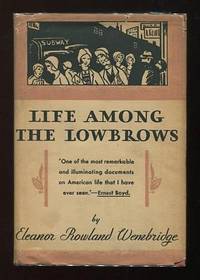 by Wembridge, Eleanor Rowland
Boston/New York: Houghton Mifflin Company. Very Good+ in Very Good dj. (c.1931). Later Printing. Hardcover. [modestly shelfworn, light age-toning to edges of text block, one-time owner's signature on ffep (see NOTE below); jacket a little darkened along spine, tiny tears and minor paper loss at several corners]. Mrs. Wembridge, following up her earlier work "Other People's Daughters," here turned her attention to boys and well as girls -- but it's pretty clear that it's the uneducated, foolish, frivolous, "moronic" girls that really got under her skin. Many of these chapters center around girls who, in one way or another, have made poor life choices that have left them permanently mired in society's underclass (often tethered to some equally feckless man-boy). The author (1882-1944), who received her undergraduate and graduate degrees from Radcliffe College (Ph.D. 1905), taught psychology at Mr. Holyoke College and Reed College, and served with the American Red Cross in New York during World War I. After the war, she worked for a time supervising military aides in the U.S. Surgeon General's office in Washington, D.C., before moving to Cleveland in 1922 to take a position as a psychologist at the Bedford Reformatory for Women. One of her other positions (and her billing on the title page of this volume) was as referee of the Juvenile Court of Cuyahoga County, Ohio, which brought her into close contact with a veritable army of "lowbrows" and, one must say, gave her a rather jaded view of humanity in general. (From her Preface: "Because accomplished authors tend to write of complex people, and a clever public reads their books, there is a tendency to forget that these gifted groups, compared to the total population, are very small. In human society, they are far outnumbered by the slow-witted and inarticulate.") I don't know that she lives up to the praise from the critic quoted on the rear jacket panel bestows upon her for "understand[ing] youngsters in trouble without feeling superior about them" -- her frequent deployment of the word "moron" kinda suggests there's a LITTLE superiority in her attitude -- but she is a good storyteller, and often makes you laugh and wince simultaneously. Like her earlier book, this volume is chock-full of vivid vignettes about the difficult circumstances faced by girls (and boys) who either "went bad" or never had much of a chance in life to begin with due to their social or economic situations. NOTE that the one-time owner, who has written her name at the top of the ffep, was a "Virginia Johnson"; I have no reason, however, to believe that this was the Viriginia Johnson of Masters & Johnson. . (Inventory #: 25012)
$100.00 add to cart Available from ReadInk
Share this item
ReadInk
Offered by