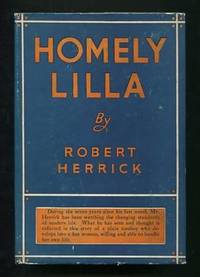 by Herrick, Robert
New York: Harcourt, Brace and Company. Very Good+ in Very Good dj. (c.1923). First Edition. Hardcover. [good solid copy, light shelfwear, a bit of dust-soiling to top of text block; jacket moderately edgeworn, lightly scuffed, a bit of soiling to rear panel]. "Story of a plain tomboy who develops into a fine woman, willing and able to handle her own life. . . . Her problems are the problems of many woman -- a home that was a shell, ideas that she could not subscribe to, a marriage that held neither love nor respect." In his novels, Herrick (1868-1938) "developed themes of social discontent, the changing role of women, and the effects of social isolation" (per Wikipedia). In a thoughtful review of the book in the Chicago Tribune, Fanny Butcher praises the book as "one of the most intimate, one of the frankest stories of marriage that any one has ever written. It is unconventional in the extreme, and by unconventional I mean exactly what I say -- not that it is 'naughty,' but that it is not according to the conventions of thought which every one pretends dominate the world." Very uncommon, especially with the dust jacket. . (Inventory #: 19107)
$250.00 add to cart Available from ReadInk
Share this item
ReadInk
Offered by