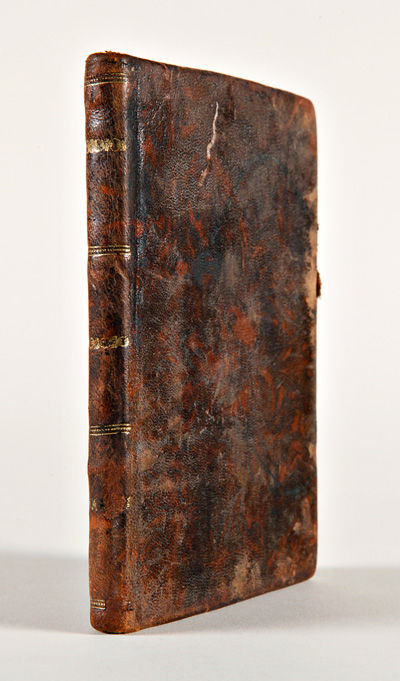 by [United States Constitution]: [Washington, George]
Mexico: Imprenta a cargo de Martin Rivera, 1823. [4],66pp. Small octavo. Contemporary mottled Mexican sheep, spine gilt. Minor edge wear, light scuffing to boards, short wormtrack on front board. Small ownership mark reading "JNB" branded on front and rear pastedowns, ink ownership signature of "De Francisco Gonzalez de Cossio" on front flyleaf. Internally clean. Very good. This is the first Mexican printing of the United States Constitution, accompanied by two important addresses by George Washington. This work was produced in anticipation of Mexican independence from Spain, and the U.S. Constitution in particular provided inspiration to the drafters of the constitution of newly-independent Mexico. Written in 1824, it was the first constitution of Mexico as a sovereign state, and the constitution under which the colonization of Texas by Americans would take place. It is ample evidence of the transnational influence on the United States Constitution on emerging democracies, in this case America's neighbor to the south. All seven articles of the United States Constitution are printed in full in Spanish in a section that is headed by a Federal garland ornament. The names of all the signers are given at the conclusion of the main text. This is followed by a section printing the first twelve amendments, entitled here as "Correcciones," an interesting interpretation of the role of constitutional amendments. The final page contains the text of an amendment passed by the House and Senate (and signed in print by Senate President pro tem John Gaillard and House Speaker J.B. Varnum prohibiting any American citizen from accepting a title of nobility or honor from a foreign government, under threat of losing ones American citizenship and holding any further elective office. This "Titles of Nobility" amendment was passed by Congress in 1810 and came close to ratification by two-thirds of the states in the 1810s, but has to this day never been ratified. The inclusion of this amendment is an interesting commentary on the priorities and concerns of Mexican lawmakers. The U.S. Constitution is preceded by two chapters printing addresses by George Washington, whose actions following the American Revolution and his two terms as President were influential well beyond the borders of the United States. The first chapter prints Washington's 1796 Farewell Address to the United States ("Discurso de Despedida de Washington al Pueblo de los Estados-Unidos"). Designed by Washington and his principal advisors in drafting it - James Madison and Alexander Hamilton - as both a valedictory and advice to succeeding generations, the address served as a guidepost to Americans from the point of its publication. The Farewell Address would have been of particular interest to the Mexican Constitutional framers. The second section prints Washington's Address to the Continental Army in 1783 ("Carta Circular del General Washington a los Gobernadores de los Estados, fecha en el Cuartel General de Newburgh 18 de Junio de 1783"). In this circular letter, General Washington announces his intention to resign his command of the Continental Army and retire into private life. He also expounds in detail on the serious issues facing the nascent United States government. Both of Washington's addresses are printed fully in Spanish, as is the constitution. OCLC records just eight actual copies over three records. This is the first copy that we can find in the market in over a century, and the first copy we have handled of this first Mexican printing of the United States Constitution. OCLC 24072481, 503926127, 1097838706. SABIN 16060. PALAU 59641, 374086. (Inventory #: WRCAM55421)
$15,750.00 add to cart or Buy Direct from
William Reese Co. - Americana
Share this item