W.C. Fields: His Follies and Fortunes 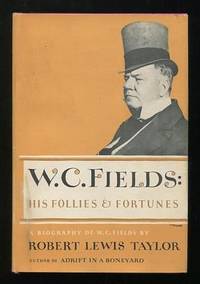 by Taylor, Robert Lewis
Garden City NY: Doubleday & Company, Inc.. Near Fine in Very Good+ dj. 1949. Book Club Edition. Hardcover. [a good solid book, very slight wear to extremities, one-time owner's signature on ffep; jacket is in very nice shape, blemished only by a smudge-line about three inches long at the lower left of the front panel; although its' a book club issue, the book appears identical to the trade edition (including its "heft") in almost all respects]. (B&W photographs) Taylor's entertaining, myth-making biography of The Great Man, the first to appear after Fields's death on Christmas Day of 1946, and for many years the standard work on the comedian -- and, unfortunately, the source of a some misinformation as well. James Curtis, author of the best biography of Fields to date (published in 2003), explains how Taylor had some significant advantages -- notably the blessing of Gene Fowler, Fields's longtime friend, access to material given to Fowler by Fields himself, and contacts arranged by Fowler with various other Fields associates -- but in the end produced a book that "did much to reinforce the impression that Fields was largely the character he portrayed onscreen. Denied access to his subject's scrapbooks and correspondence [and without the Fields family's cooperation], Taylor also made some horrendous blunders with regard to the historic record. Nevertheless, [the book] was a swift and amusing read by a talented portraitist, and it remained in print, in one form or another, for more than half a century." [Quoted without permission from Curtis's excellent book. Thanks, Jim!] A further note on the Book Find Club edition: laid in to this copy is the original club invoice slip for this book, indicating that it was sent to noted film director Vincent Sherman, from whose estate this book was acquired. . (Inventory #: 25352)
$20.00 add to cart Available from ReadInk
Share this item
ReadInk
Offered by