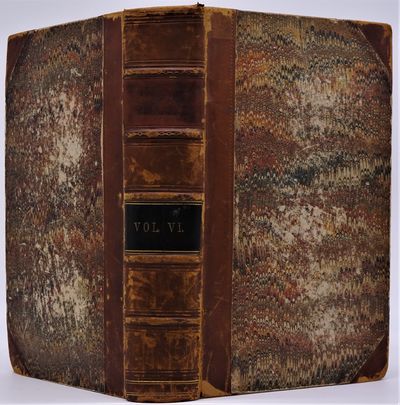 by Melville, Herman
New York: Dix & Edwards, 1855. SCARCE. The first appearance of this novella about a revolt on a Spanish slave ship captained by Don Benito Cereno, appearing in the magazine in three installments on pages 353-367, 459-471, and 633-644. Acknowledged as one of Melville's greatest achievements, it was included with some revisions in his short story collection "The Piazza Tales" published May 1856. Very Good indeed, bound in contemporary quarter calf over marbled boards, five raised bands with dark brown calf volume label in gilt, title label missing, marbled end papers and edges. The complete six monthly magazines with title pages, well bound and lacking only the original wrappers. Moderate toning to end papers only, interior pages clean and with no foxing or toning. Quite uncommon, especially so in collectible condition. Basis for the 1969 French film of the same title, winner of a Gold Medal at the 1969 Venice International Film Festival, and the NET Playhouse television episode in 1967. American Literature, Science, and Art, Volume VI.. First Printing. Quarter Calf. Very Good/No Jacket, As Issued. 8vo - over 7¾" - 9¾" tall. (Inventory #: 008113)
$3,500.00 add to cart Available from
Dale Steffey Books
Share this item
Dale Steffey Books
Offered by

New York : The Vanguard Press , 1969
(click for more details about Them)

Tell Me How Long the Train's Been Gone

New York : Dial Press , 1968
(click for more details about Tell Me How Long the Train's Been Gone)
View all from this seller>