POEMS OF THE PAST AND THE PRESENT 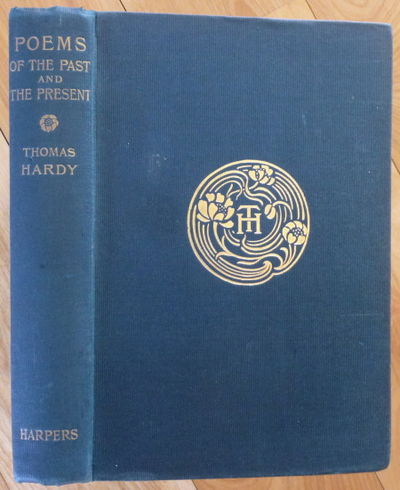 First Edition of Hardy's second volume of verse, which (like the first, WESSEX POEMS), consisted of only 500 copies. None of Hardy's exceedingly scarce multi-volume novels consisted of fewer copies; for example, FAR FROM THE MADDING CROWD, THE RETURN OF THE NATIVE and TESS OF THE D'URBERVILLES each had a 1000-copy first edition. This title, actually published in November 1901, contains 99 poems, some of which deal with the Boer War; WESSEX POEMS had contained 51 poems. POEMS OF THE PAST AND THE PRESENT marks the end of Hardy's association with the publishing firm of Osgood, McIlvaine & Co. (and their successors, Harper & Brothers of London, of which Clarence McIlvaine was in charge). This is a near-fine copy (a few minor rear-cover marks, endpapers cracked). In our experience, though both WESSEX POEMS and this title consisted of the same number of copies, this is a considerably scarcer book -- in fact, this is only the fifth copy that we have been able to offer during our forty years in business. Purdy pp 107-119. (Inventory #: 14524)
$875.00 add to cart or Buy Direct from
Sumner & Stillman
Share this item

THE LADYBIRD | The Fox : The Captain's Doll

1923
(click for more details about THE LADYBIRD | The Fox : The Captain's Doll)

THE VIRGIN AND THE GIPSY