Catalogue of The Engraved Work of Asher B. Durand Illustrated by The Insertion of Portraits, Views, Autographs, etc. Collected and Arranged by Charles Henry Hart, Philadelphia 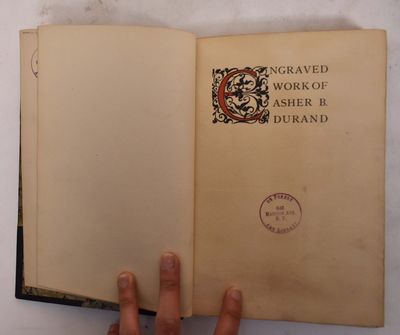 by Hart, Charles Henry
New York: Grolier Club, 1895. Unique edition. Softcover. VG+. 3/4 dark green leather with marbled paper-cpovered boards, 5 raised-bands with gilt tile and top edge gilt. Marbled endpapers. Bound by Hyman Zucker. 103 pp. + extras. Nine page essay on the artist by C.H.H. (Charles Henry Hart) Lists appx. 237 works. Rare, and issued in 350 copies only. Regular edition lacks plates. This unique copy, produced (and accompanied by a bound letter from the Council of the Grolier Club), contains the following items bound into it, in this order: Presentation letter from Grolier Club and their slip stating it as a presentation copy; mounted article from the Evening Post dated April 16, 1895 describing the exhibition; holograph letter dated New York, Nov. 9, 1867 (T. Spolion Cheany, LL.D.?) 2 pages, signed; lengthy thank-you note to Charles Hart from John Durand (who is thanking him for sending him a copy of the Grolier catalogue (sent from 164 Bd. Montparnesse, Paris); holograph letter from A.B. Durand dated South Orange, Nov. 24, /77 wherein he discusses a portrait of himself by Pekenino and also the publication of The Crayon; Frontis portrait photogravure of engraving of the portrait by Pekenino; Title-page; engraving of Old Pat by Durand after painting by S.L. Waldo; engraving by Durand of a painting by Waldo and Jewett of John Trumbull; GoupilGravure of Standing nude woman in a forest (presumably after an engraving by Durand); (end of essay signed in ink by Charles Henry Hart); photogravure (?) of an elderly A.B. Durand (unidentified); Georgias Jones. Gistrio. Natus MCXXX (drawn by F.S. Agate and engraved by Durand; Gilbert Charles Stuart, engraved by Durand after a miniature by Sarah Goodrich; engraved title-page for The Lily and The Rose, drawn by Richard Westall engraved by P. Maveriick & Durand; reproduction of No. 168 from the exhibition entitled J. Wilson, Business Card (with altered lettering for the reproduction that accompanies this exhibition); etching of Durand on a stool with paintbrush and palette with landscape painting to his right; Sisters (painted by S.F.B. Morse and engraved by Durand); Gipseying Party (painted by C.R. Leslie and engraved by Durand); Anne Page, Slender & Shallow (painted by C.R. Leslie and engraved by Durand); The Dull Lecture (painted by G.S. Newton and engraved by Durand); leaflet for Annual Dinner of The Typothetae of The City of New York from January 17, 1901 (with original engraving by Durand printed from original plate on the back cover, with a printing press and two figures, a man and a woman. A unique and important relic of Durand and Charles Hart. (Inventory #: 176419)
$2,950.00 add to cart or Buy Direct from Mullen Books
Share this item