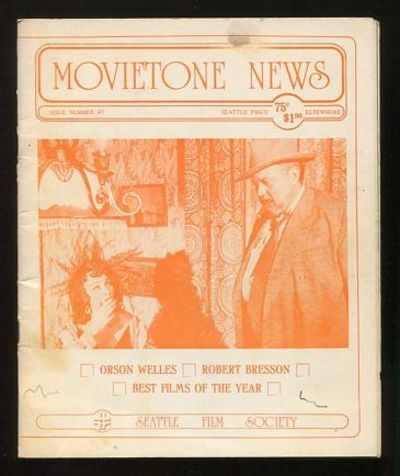 by Jameson, Richard T., ed.
Seattle: The Seattle Film Society. Very Good. 1976. (No. 47). Stapled wraps. [minor rubbing to covers, small stain at top of front cover, a couple of totally unnecessary pen scribbles near bottom of front cover, apparently executed by some idiot trying to figure out if his pen still worked]. (B&W photographs) Features include: a reassessment of Orson Welles' TOUCH OF EVIL, occasioned by the resurfacing of a longer print (this was before "restoration" was being done on every other movie in the vaults); analysis of LANCELOT DU LAC (Robert Bresson); contributing writers' "Ten Best" lists for 1975, and the editors' annual "Moments out of Time" feature, an evocative review of "scenes, shots, stances, sensations onscreen in '75"; brief reviews of DOG DAY AFTERNOON (Sidney Lumet), THE NICKEL RIDE (Robert Mulligan), THE ADVENTURE OF SHERLOCK HOLMES' SMARTER BROTHER (Gene Wilder), others. . (Inventory #: 25361)
$20.00 add to cart Available from ReadInk
Share this item
ReadInk
Offered by