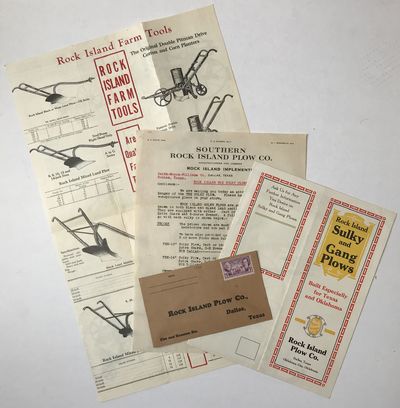 by [Texas]. [Agriculture]
[Dallas, 1936. Very good.. Four items, including two folding pamphlets, one typed letter, signed, and an envelope. Light wear and tanning. Interesting and colorful promotional material for Rock Island Plow Company of Dallas and Oklahoma. A large folding poster printed in red and yellow depicts the two most popular plow models, "built especially for Texas soils," on one side of the sheet, and on the other a third illustration of a plow with promotional text. A second folding pamphlet comprises a small illustrated catalog with additional models, modifications, and specifications. The advertisements were sent to the Smith-Moore-Williams Co. of Bonham, Texas, with a typed letter, signed, and dated September 1936, exhorting them to post the ads in their store and including a wholesale price list. A stamped return envelope for potential orders is also optimistically included. Very attractive agricultural promotionals, though one wonders what the market was for plows in North Texas and Oklahoma at the height of the Dust Bowl. (Inventory #: 886)
$250.00 add to cart Available from
McBride Rare Books
Share this item