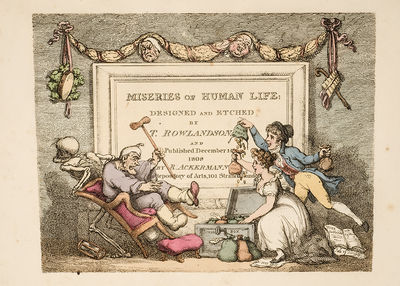 "Plate 40 'Pall Mall' is rare, most copies re-placing this with 'The Chiropodist' (Abbey).

According to ABPC just one copy complete with all 51 plates has appeared at auction over the past 35 years (Christie's New York, May 14th, 1985)

"The Miseries of Human Life, [originally] written in 1806 by James Beresford (1764-1840) of Oxford University, was extraordinarily successful, becoming a minor classic in the satirical literature of the day. In a humorous dialogue between two old curmudgeons, the book details the "petty outrages, minor humiliations, and tiny discomforts that make up everyday human existence." The public loved it: dozens of editions were published, and printmakers rushed to illustrate their own versions of life's miseries.

Thomas Rowlandson (1756/57-1827) began drawing scenes based on Beresford's book as soon as it was published, and after two years the luxury print dealer Rudolph Ackermann selected fifty of his hand-colored etchings for a new edition of Miseries. Many of the now-iconic characters and situations that the artist drew for this project - some based closely on Beresford's text and others of his own invention-reappeared in later works, with variations on the Miseries turning up until the artist's death.

In the early twentieth century, Dickson Q. Brown, Class of 1895, donated two thousand Rowlandson prints and all of the artist's illustrated books to Princeton University Library. Of particular importance was a small box of Rowlandson's unpublished, undated drawings, including many specifically related to his Miseries series... Just as in Rowlandson's book, those specific to Beresford's text are shown alongside others that illustrate life's miseries more generally, including some from the Princeton University Art Museum's collection. The sections follow the chapters, or "groans," of Beresford's book." (Julie Mellby, Graphic Arts Curator, Rare Books and Special Collections, Princeton University).

William Morley Pegge (1952-1927) appears to have been a sportsman and a collector. He collected lace, books and drawings, and was a client of Messrs Dowdeswell and Dowdeswell. In 1910 he was a buyer at the sale of Sir William Neville Abdy's collection at Christie's, London. His own library was sold by Sotheby's, London, on 29 March 1928.

Two Mice beside a Piggy-bank

n.p.: , 1865
(click for more details about Two Mice beside a Piggy-bank)
View all from this seller>