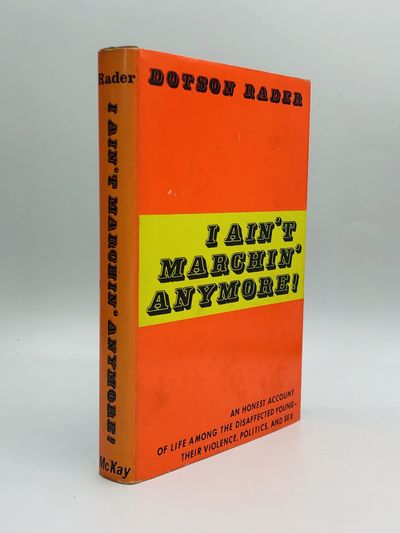 by Rader, Dotson
New York: David McKay Company, Inc, 1969. First Edition. Hardcover. Very good/Very good. Presentation copy, inscribed by Rader to his friend and fellow radical Craig Anderson, with related correspondence laid in. Anderson, who attended Columbia University with Dotson, is referred to as Sean in the book which provides "an honest account of life among the disaffected young - their violence, politics and sex." Rader's inscription, which is dated May 30, 1969, reads in part: "For my friend and cowriter, Craig Anderson - who went through the thick of it with me and stood. For the man, I come." In the fourth and fifth chapters, Rader writes about attending a 1967 march against the Vietnam War with Anderson and other friends in Washington, D.C. He also recalls Anderson's words: "This war is horrible ... not just for the soldiers and civilians dying, not just because of the money wasted. You know it is so goddammed horrible because it is so American really, for the first time, a war that fits what America has become, what she is. We're nothing like Lincoln's America, different in kind. I think America loves war. She loves to kill .... guns, weapons, beating young people, dropping tons of bombs on people you never see. She gets a charge out of it ... sick. She is sick." In a 1984 holiday card laid in the book, Rader thanks Anderson, manager of the Rare Book Room at the Strand Bookstore in Manhattan, for some books and notes he recently completed his biography of Tennessee Williams. The memoir, Tennessee Williams: Cry of the Heart (1985), is based on his intimate friendship with the playwright from the time of their first meeting at a SoHo party in 1969 until Williams' death in 1983. The book is further inscribed by John Conrad Weiser, to whom the book is dedicated. Weiser was the faculty supervisor and general manager of radio operations for WKSU at Kent State University during the time leading up to and in the months after the Kent State shootings. He donated a collection of his papers related to Dotson Rader to Columbia University. Also laid in is a 1969 invitation to the launch event for this book at Columbia and a 1970 invitation to a benefit with a screening of Andy Warhol's Blue Movie in New York. Octavo. Original black cloth binding, with yellow titles. Negligible staining to the front flyleaf. The dust jacket is a touch sun faded along the spine; otherwise very good. (Inventory #: 70473)
$850.00 add to cart Available from Johnson
Share this item