Voyages to Hudson Bay in Search of a Northwest Passage 1741-1747; Vol. I - The Voyage of Christopher Middleton, Vol. II - The Voyage of William Moor and Francis Smith [Hakluyt Society Second Series No. 177 & 181] 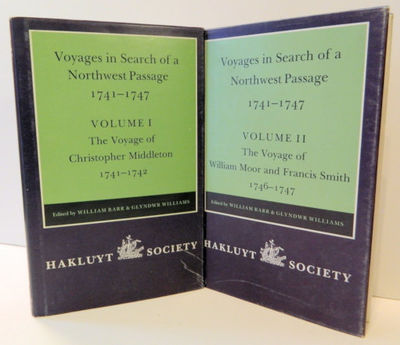 by Barr, William and Glyndwr Williams (Eds.)
London: The Hakluyt Society - Cambridge University Press, 1994. First Edition. Near Fine/Very Good. [8.5x5.75in]; Vol. I, 1994 - xii, 333 pp., 11 plates including frontispiece, seven maps and charts, three illustrations, bibliography and index; Vol. II, 1995 - xv, 393 pp., 20 plates with frontispiece, 13 maps, charts and views, 6 illustrations, appendices, bibliography and index; light blue cloth covers with gilt lettering on spine and gilt devise on front, all edges trimmed; Dark blue dust jacket with dark blue and white lettering in white bordered pale green field on front and spine, advertisement on back; Negligible shelf wear to book, dust jacket spine faded with some rubbing and scratches to surfaces. The Hakluyt Society was founded in 1846 in London for the publication of primary sources of exploration and discovery expeditions. They were named after Richard Hakluyt (1552-1616) a collector and editor of narratives of voyages and travels. The publications are primarily from English expeditions related to English interests from the 17th century on. The Society is still very active and publishing historic works in a series of publications - the first from 1847-99, the second from 1899-1998 and the third beginning in 1999. In addition, there is an Extra series of more extensive books for direct sale to the public. These volumes cover the early search for the North West Passage through Hudson Bay, which was determined not to lead to the Pacific Ocean. (Inventory #: 13744)
$52.00 add to cart Available from
David Spilman Fine Books
Share this item