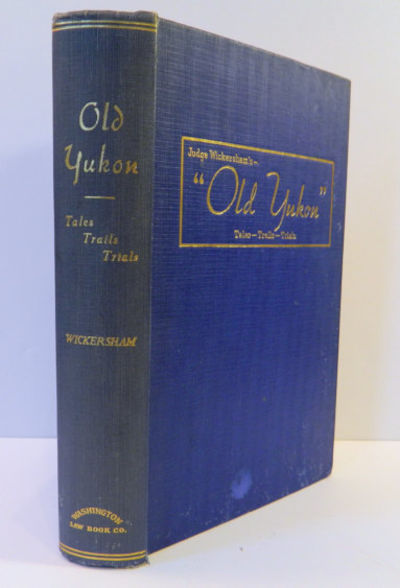 by Wickersham, Hon. James
Washington, D.C.: Washington Law Book Co, 1938. First Edition, 1st Printing. Very Good. Inscribed, [9.25x6.25in]; xi, 514 pp., [4], frontispiece map of Alaska, 64 images, index; Blue cloth covers with gilt lettering on front and spine, gilt border and rules, all edges trimmed; Shelf wear to covers, edges and corners, several water stains to covers, spine darken with small closed tears to top and bottom of spine, ink inscription and illustration on front free end paper with tipped in brochure from House of Wickersham "Greetings from House of Wickersham, Juneau, Alaska August 24, 1968 (Wickersham Day) taped bookplate of James Wickersham on front end paper. [Adams Six Guns 2390]. James Wickersham (1857-1939) was appointed as a Federal Judge for Alaska by President William McKinley in 1900. He then served as the Alaska delegate to Congress from in two periods 1908-17 and 1931-33 and was a major force in Congress to establish Alaska as a Territory and provide for greater Federal assistance. He was also an author of Alaskan law reports and the 1927 "A Bibliography of Alaskan Literature 1724-1924" and founder of the Alaska Agricultural College and School of Mines (now the University of Alaska). In his early years, he was also an explorer and made and failed in the first attempt to climb Denali - Mt. McKinley. This book is about Wickersham's time as a Federal Circuit Judge visiting the remote places in Alaska and the people. He provides a readable narrative of the early days of the Alaskan/Yukon Gold Rush and the characters, such as Jefferson Randolph "Soapy" Smith, a notorious short time villain during the Gold Rush. (Inventory #: 13778)
$83.00 add to cart Available from
David Spilman Fine Books
Share this item