RITUAL AND DEGREE BOOK OF THE UNITED BROTHERS OF FRIENDSHIP, CONTAINING ALL FORMS AND CEREMONIES OF THE FIRST, SECOND, THIRD, AND FOURTH OR P.M.C. DEGREE... 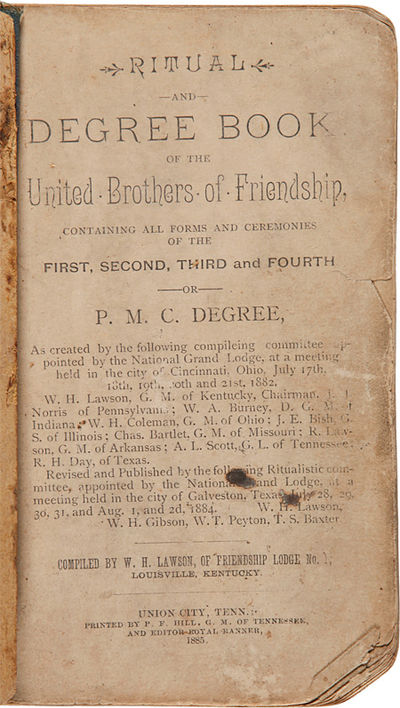 by [United Brothers of Friendship]: Lawson, W.H., compiler
Union City, Tn.: Printed by P.F. Hill, G.M. of Tennessee and Editor Royal Banner, 1885. 92,[3]pp. Illustrated. 12mo. Original blue cloth over boards. Cloth mostly separated from boards, cloth worn and somewhat tattered, front board detached, rear board broken but adhering to cloth. Text toned and soiled, bottom corner dog-eared throughout, last leaf detached but present. Good only. An exceedingly rare manual of rituals for an African-American fraternal organization first formed by both slaves and freedmen in Louisville in 1861. The United Brothers formed as a benevolent association in order to care for the sick, bury the dead, and generally support each other at the outset of the Civil War. At the time of organization, most of the founders were teenagers. The present work was compiled by W.H. Lawson, one of the founders of the association, after the group reorganized in 1868. The reorganization occurred when several founders of the society were in night school together and their teacher encouraged them to expand their reach. By the mid-1870s the group spread to surrounding states, including Tennessee, as evidenced by the present work. The United Brothers eventually expanded membership from the Great Lakes to the Gulf of Mexico, numbering over 200,000 members at their peak in the late 19th century, before declining and fading into history by the early 20th century.

The present work describes rituals, funerary rites, ceremonies to install organizational officers, various forms, their "Code of Procedure" (effectively their Constitution), and other aspects of Masonic-like degree. The text is interspersed with various illustrations which include a full-page diagram of the lodge room, a page of thirteen insignia (called "Jewels") representing the degrees of membership, seals, a ritual diagram for the ceremony of the Past Masters Council, and more.

The imprint states that the work was printed by P.F. Hill, the Grand Master of the United Brothers of Friendship in Tennessee, and that he was also the editor of the ROYAL BANNER. The latter was a lodge newspaper for the United Brothers printed by Hill. Hill also edited the COLORED CUMBERLAND PRESBYTERIAN, an African-American newspaper. He printed both the ROYAL BANNER and the COLORED CUMBERLAND PRESBYTERIAN in Nashville.

No copies of the present work appear in OCLC. The only OCLC record for any edition of this title is a single copy of an 1894 Louisville edition at Emory. (Inventory #: WRCAM55471)
$675.00 add to cart or Buy Direct from
William Reese Co. - Americana
Share this item

JOURNAL OF THE PROCEEDINGS OF THE CONVENTION MET TO FORM A CONSTITUTION AND SYSTEM OF STATE GOVERNMENT FOR THE PEOPLE OF ARKANSAS...

Little Rock : Printed by Albert Pike , 1836
(click for more details about JOURNAL OF THE PROCEEDINGS OF THE CONVENTION MET TO FORM A CONSTITUTION AND SYSTEM OF STATE GOVERNMENT FOR THE PEOPLE OF ARKANSAS...)

London : Printed by Thomas Baskett...and by the Assigns of Robert Baskett , 1750
(click for more details about ANNO VICESIMO TERTIO GEORGII II...AN ACT FOR IMPROVING THE NAVIGATION OF THE RIVER LOYNE, OTHERWISE CALLED LUNE; AND FOR BUILDING A QUAY OR WHARF NEAR THE TOWN OF LANCASTER IN THE COUNTY PALATINE OF LANCASTER [caption title])
View all from this seller>