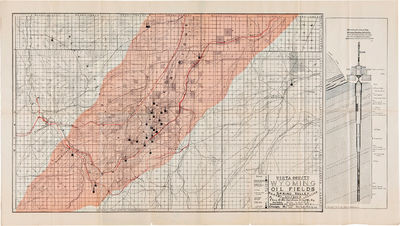 by [Wyoming]: Richardson, Charles O.
[N.p., but likely Chicago], 1903. Two-color map on thin paper, approximately 18 x 31 3/4 inches. Original folds. Slight separations at a few crossfolds, few short closed marginal tears. Very good. An interesting promotional map produced by Chicago oil and real estate speculator Charles O. Richardson, highlighting the oil- producing areas of Uinta County, Wyoming at the dawn of the 20th century. Uinta County is located at the extreme southwestern corner of Wyoming, on the border with Utah. At the time this map was produced, crude oil was vitally important to both the Standard Oil Company and the Union Pacific Railroad - for the former to refine into gasoline and for the latter to lubricate locomotives. Both entities appear on the present map.

The "Index" or key of the map references the first two wells of the Standard Oil Company, other oil & gas wells, the lands of the Standard Reserve Oil Company, the lines for the Chicago Burlington & Quincy Railroad (red dashed line), the Union Pacific Railroad Main Line (solid red line), and certain county and other roads. On the far right portion of the sheet is a large schematic cross-section showing "the stratifications of oil sand encountered" in drilling the Union Pacific Oil Well.

Oil was known to exist in Wyoming long before the present map, since at least the 1830s when Captain Bonneville found an oil spring near Dallas Dome. Uinta County was known to have oil near Hilliard when Fort Bridger was established nearby in 1842 (both appear on the present map). Yet, this map is one of the earliest depictions of the industry on a promotional piece, produced when the railroad, the automobile, and the motorcycle created explosive demand for oil. Overall, the present map is testament to the importance of southwestern Wyoming in the history of the oil industry. Wyoming still ranks in the top ten among oil-producing states in the U.S.

JOURNAL OF THE PROCEEDINGS OF THE CONVENTION MET TO FORM A CONSTITUTION AND SYSTEM OF STATE GOVERNMENT FOR THE PEOPLE OF ARKANSAS...

Little Rock : Printed by Albert Pike , 1836
(click for more details about JOURNAL OF THE PROCEEDINGS OF THE CONVENTION MET TO FORM A CONSTITUTION AND SYSTEM OF STATE GOVERNMENT FOR THE PEOPLE OF ARKANSAS...)

London : Printed by Thomas Baskett...and by the Assigns of Robert Baskett , 1750
(click for more details about ANNO VICESIMO TERTIO GEORGII II...AN ACT FOR IMPROVING THE NAVIGATION OF THE RIVER LOYNE, OTHERWISE CALLED LUNE; AND FOR BUILDING A QUAY OR WHARF NEAR THE TOWN OF LANCASTER IN THE COUNTY PALATINE OF LANCASTER [caption title])
View all from this seller>