President Coolidge Turns Down An Honorary Position On A Charity Council, The American Institute Of Operatic And Allied Arts 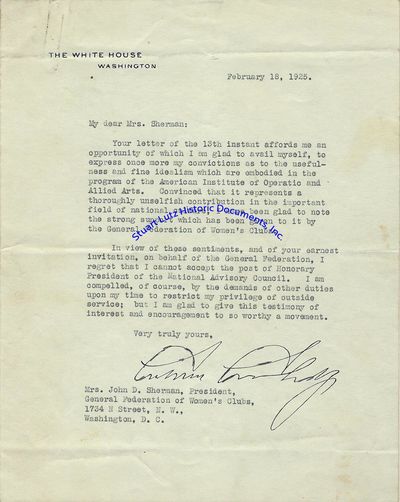 signed
by CALVIN COOLIDGE
CALVIN COOLIDGE (1872-1933). Coolidge was the Thirtieth President. TLS. 1pg. February 18, 1925. The White House, Washington. A typed letter signed “Calvin Coolidge” as President on “The White House” letterhead. Coolidge wrote to Mrs. John D. Sherman, President of the General Federation of Women’s Clubs, turning down an honorary position: “Your letter of the 13th instant affords me an opportunity of which I am glad to avail myself, to express once more my convictions as to the usefulness and fine idealism which are embodied in the program of the American Institute of Operatic and Allied Arts. Convinced that it represents a thoroughly unselfish contribution in the important field of national culture, I have been glad to note the strong support which has been given to it by the General Federation of Women’s Clubs. In view of these sentiments, and of your earnest invitation, on behalf of the General Federation, I regret that I cannot accept the post of Honorary President of the National Advisory Council. I am compelled, of course, by the demands of other duties upon my time to restrict my privilege of outside service; but I am glad to give this testimony of interest and encouragement to so worthy a movement.”. The letter is in very good condition with a rust stain from a paperclip, light soiling and it is mounted to a larger sheet. Coolidge’s signature is a bit choppy due to an evident pen failure. (Inventory #: 4879)
$450.00 add to cart Available from
Stuart Lutz, Historic Documents, Inc.
Share this item