Shortly Before The Civil War, The Future Confederate Secretary Of The Navy Writes A Recommendation For A Naval Position 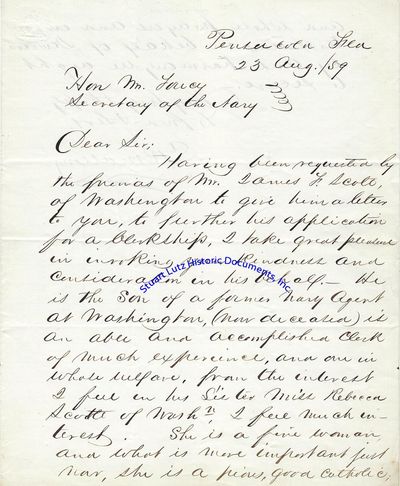 signed
by STEPHEN MALLORY
SHORTLY BEFORE THE CIVIL WAR, THE FUTURE CONFEDERATE SECRETARY OF THE NAVY WRITES A RECOMMENDATION FOR A NAVAL POSITION STEPHEN R. MALLORY (1812-1873). Mallory was a Senator from Florida and the Confederate Secretary of the Navy. ALS. 2pg. 8” x 10”. August 23, 1859. Pensacola, Florida. An autograph letter signed “S.R. Mallory” to Isaac Toucey, the Secretary of the Navy. He wrote: “Having been requested by the friends of Mr. James F. Scott, of Washington to give him a letter to you, to further his application for a clerkship, I take great pleasure in invoking your kindness and consideration in his behalf. He is the son of a former Navy Agent at Washington, (now deceased) is an able and accomplished clerk of much experience, and one in whose welfare, from the interest I feel in his sister Miss Rebecca Scott...I feel much interest. She is a fine woman, and what is more important just now, she is a pious, good Catholic, and whose prayers and intercessions in behalf of Democracy and harmony we ought to secure…”. Mallory opposed secession but being well versed in naval matters and having been Chairman of the Senate Naval Affairs Committee, he was Jefferson Davis' choice for Secretary of the Navy. Florida was accorded an important Cabinet post in recognition of its early secession, therefore this Irish Catholic joined the Confederate government and served creditably throughout the Civil War. His correspondent here, Secretary of Navy Toucey, a former Connecticut Governor and Senator, was accused of southern sympathies. The letter is in fine condition. (Inventory #: 4856)
$600.00 add to cart Available from
Stuart Lutz, Historic Documents, Inc.
Share this item