Two Weeks After The Battleof Torgau, Frederic The Great Thanks A Woman For Her Kind Words About “The Great Victory Over My Enemies That Providence Kindly Granted Me” 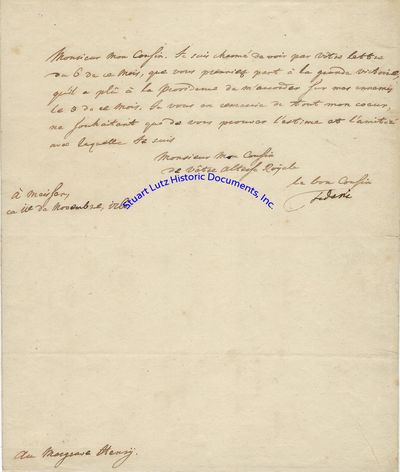 signed
by FREDERICK THE GREAT
FREDERIC THE GREAT OF PRUSSIA (1712-1786). Frederic ascended to the throne in 1740 and promptly started the War of Austrian Succession, which he won. In the Seven Years War, he defeated France and Austria after the Russians withdrew from the conflict. Domestically, Frederic established many legal reforms and religious tolerance. LS. 1pg. 7 ¾” x 9 ½”. November 11, 1760. Meissen [Germany]. A letter signed “Frederic” addressed to Margrave Henry: “I am delighted to see from your letter, dated the 6th of this month that you are taking part in the great victory over my enemies that Providence kindly granted me on the 3rd of this month. I thank you from the bottom of my heart…”. The Battle of Torgau took place on November 3, 1760. During the Seven Years War, it pitted Frederic the Great with 44,000 men against an Austrian army of 65,000 soldier led by Marshal von Daun. In a costly and bloody battle, Frederic’s forces emerged victorious. The letter is inlaid and is in very fine condition with dark ink. (Inventory #: 4859)
$1,800.00 add to cart Available from
Stuart Lutz, Historic Documents, Inc.
Share this item