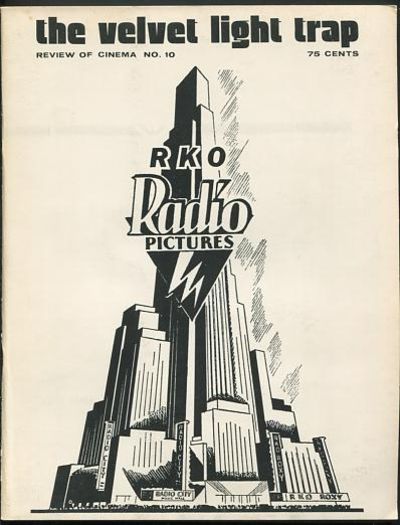 by (Davis, John, and Susan Dalton, eds.)
Cottage Grove WI: Arizona Jim Co-Op. Near Fine. 1973. (No. 10). Periodical. [faint external soiling, minor crease near top of rear cover]. (B&W photographs) A special issue of this critical/historical film journal, devoted to RKO Radio Pictures. Includes: an overview of the studio's history and a chronology; "RKO's Fallen Women, 1930-1933"; an article about the production design of the Fred Astaire-Ginger Rogers musicals, as overseen by the studio's Art Department head, Van Nest Polglase; an interview with director John Cromwell; an analysis of DANCE, GIRL, DANCE (Dorothy Arzner, 1940); an interview with director Mark Robson, remembering his work at RKO with Orson Welles and Val Lewton; an analysis of OUT OF THE PAST (Jacques Tourneur, 1947), including an interview with screenwriter Daniel Mainwaring, who also (as "Geoffrey Homes") wrote the novel "Build My Gallows High," on which the film was based; Part One of an article on Nicholas Ray's years at RKO, and an interview with Ray himself. Continuing the RKO theme, the first of several books reviewed is "Val Lewton: The Reality of Terror" by Joel E. Siegel. ***NOTE that we have many more issues of this title (and other film magazines) in stock, and welcome your inquiries. . (Inventory #: 25393)
$25.00 add to cart Available from ReadInk
Share this item
ReadInk
Offered by