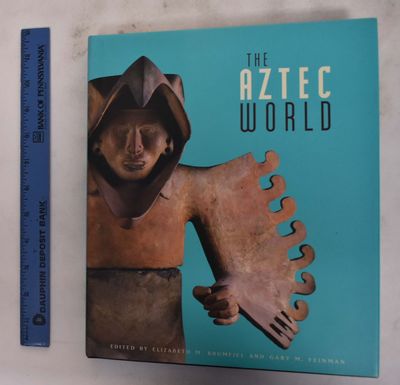 by Brumfiel, Elizabeth M. and Gary M. Feinman
New York/Chicago: Abrams/Field Museum, 2008. Hardcover. VG/VG. Black boards with aqua lettering on front and spine, bright aqua dust jacket with color illustration, xix, 252 pp, profusely illustrated in color and bw. "The Aztec World is an illustrated survey of the Aztecs based on insightful research by a team of international experts from the United States and Mexico. In addition to traditional subjects like cosmology, religion, human sacrifice, and political history, this book covers such concerns as the environment and agriculture, health and disease, women and social status, and urbanism. It also discusses the effects of European conquests on Aztec culture and society, in addition to offering contemporary perspectives on their civilization."--Jacket. Catalog of an exhibition to be held first at the Chicago Field Museum in November 2008 and then at two other U.S. venues. Includes bibliographical references and index. (Inventory #: 176468)
$30.00 add to cart or Buy Direct from Mullen Books
Share this item