The Heart is a Sleeping Beauty; The Million Dollar Hotel 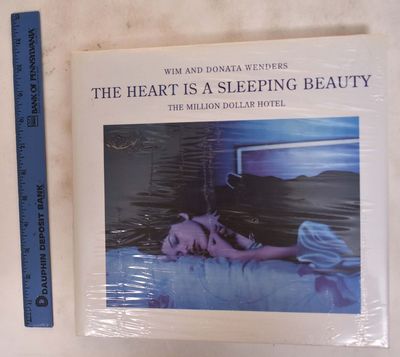 by Wenders, Wim and Donata Wenders
New York: TeNeues, 2000. Hardcover. As new in shrinkwrap. White boards with white dust jacket with color illustration on front cover, navy lettering, 151 pp, profusely illustrated in color. Foreword by Bono. Mostly color photos taken by Wim and Donata Wenders during the filming of "The Million Dollar Hotel". "Hot on the heels of the wildly successful collection of stills from Wim Wenders' hit movie, "The Buena Vista Social Club" comes this volume of images from "The Million Dollar Hotel." Wenders' newest movie, an enigmatic, eerily beautiful masterpiece that opened the 2000 Berlin Film Festival, stars Mel Gibson and Milla Jovovich and was produced and written by Bono.
Set in a decrepit hotel in downtown Los Angeles, this story of friendship, betrayal, and the power of imagination is seen through the eyes of Tom Tom, a lovesick innocent whom we first meet as he jumps off the hotel's roof-and dies with a smile on his face. In a compelling flashback, we learn of a strange murder and the cunning detective sent to investigate it and are introduced to a series of fascinating yet downtrodden characters living on the fringe of society, but filled with hope and wonder. From the sublime first image to its final haunting shot, the incandescent beauty of Wim and Donata Wenders' photography fill every page of this beautifully produced companion volume that is certain to find its way onto the shelves of Wenders' many fans, and into the collections of photography and film aficionados of all kinds." - Publisher's description. (Inventory #: 176472)
$40.00 add to cart or Buy Direct from Mullen Books
Share this item