After Sir Joshua : Essays on British Art and Cultural History 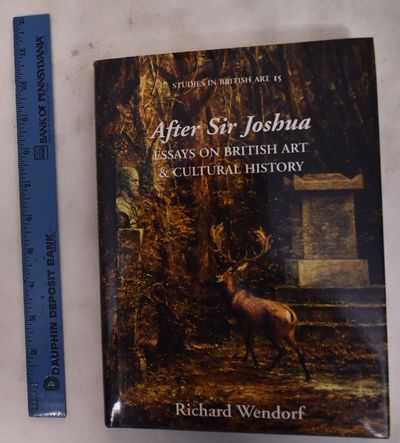 by Wendorf, Richard
London: Yale University Press, 2005. Hardcover. VG/VG. Grey cloth/boards; silver lettering. Color-illustrated dust jacket with white lettering. xvii, [5], 157 pp. with 42 color and bw illustrations. Following in the methodological footsteps of his prize-winning Sir Joshua Reynolds: The Painter in Society, Richard Wendorf's new book on British art in the eighteenth and nineteenth centuries is an experiment in cultural history, combining the analysis of specific artistic objects with an exploration of the cultural conditions in which they were created. Themes include an investigation of what happens when a painter dies, the role of writing around and within visual objects, and the nature of evidence in art history. Extended interpretations of some of the most iconic images in British art, including Constable's Cenotaph, Raeburn's Skating Minister, Stubbs's Haymakers and Reapers, and Rossetti's Prosperpine, Venus Verticordia, and Blessed Damosel, are part of a broader investigation of the ways in which we practice art history today. - from the publisher's web site. (Inventory #: 176483)
$30.00 add to cart or Buy Direct from Mullen Books
Share this item