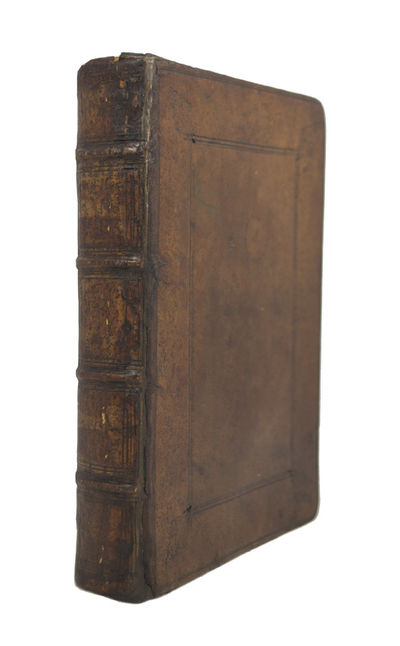 by MOFFETT, Thomas
First Edition of Thomas Moffett's "Healths Improvement" Bound After a Revised and Improved Edition of Hugh Plat's "The Jewel House" MOFFETT, Thomas. Healths improvement: or, Rules comprizing and discovering the nature, method, and manner of preparing all sorts of food used in this nation.†Written by that ever famous Thomas Muffett, Doctor in Physick: corrected and enlarged by Christopher Bennet, Doctor in Physick, and fellow of the Colledg of Physitians in London. London: Tho Newcomb for Samuel Thomson, 1655. First edition. Small quarto (7 ? x 5 Ω inches; 185 x 138 mm). [8], 296, [4, blank] pp. With the Imprimateur leaf present, bound after title-page. Two books bound together in contemporary speckled, paneled calf. Boards ruled in blind. All edges stained brown. Board edges tooled in gilt. Front hinge repaired. Back hinge cracked but firm. Staining and toning throughout. Title-page of Jewel House with small ink stains. Some marginal dampstaining and other staining throughout. Final two blank leaves with contemporary ink manuscript remedies including how to cure a sore throat. Overall a very good copy of both titles. Moffet's second posthumously issued book was Healths improvement, or, Rules comprizing and discovering the nature, method, and manner of preparing all sorts of food used in this nation (1655), edited by Christopher Bennet. This is a gossipy treatise on various aspects of diet and eating habits which Moffet intended to supplement by a similar work on drinks. It was probably compiled about 1595 and contains, inter alia, descriptions of an unusually wide range of birds and fish... His widow appears to have died at Calne, Wiltshire, in 1626. By her will, proved 26 June in that year, she left a portrait of Moffet and a book in his writing, probably Healths Improvement, to his daughter Patience. It has been supposed, on the basis of Moffet's interest in spiders, that Patience was the ëlittle Miss Muffetí of the nursery rhyme. (Oxford DNB). Thomas Moffett studied medicine at Cambridge and Basel and received his medical degree in 1578. He returned to England to practice medicine, but traveled to the Continent frequently. During his travels in Italy and Spain in 1579, he studied the silkworm and became interested in entomology. Physician to the nobles in the court of Elizabeth I, he gave up that post to become a member of Parliament in 1597. He published many medical texts and one major work on natural history. [Bound after the following title]: PLAT, Sir Hugh. The Jewel House of Art and Nature: Containing Divers Rare and Profitable Inventions, together with Sundry New Experiments in the Art of Husbandry. With Divers Chymical Conclusions concerning the Art of Distillation, and the Rare Practices and uses thereof...Wherunto is added. A Rare and Excellent Discourse of Minerals, Stones, Gums, and Resins; with the Vertues and use thereof. London: Printed by Elizabeth Alsop, 1653. Revised edition and second overall edition. Small quarto (7 ? x 5 Ω inches; 185 x 138 mm). [8],232 pp. Illustrated with numerous woodcut illustrations and diagrams. With woodcut initials and head and tail pieces. Title-page within a woodcut border. The authorship of "An additional discourse of several sorts of stones," by D.B. Gent. (p. 217-232) and the editorship of the entire work are attributed to Arnold Boate. Cf. DNB. (ESTC). Two states of the title page are known, one with the imprint of Bernard Alsop, this with the imprint replaced by his widow Elizabeth Alsop, who continued the business after his death. This is the second edition of Plat's fascinating work originally published in 1594. The book discusses 150 different topics ranging from such sundry topics as cooking, farming and wine making to the more abstract such as the medicinal properties of minerals or how to make an egg stand alone without any help. The work is illustrated with numerous woodcut illustrations and diagrams as well as a couple headpieces and initial letters. Wing M2382, P2391 ESTC R202888 , R10675. HBS 68310. $7,500 (Inventory #: 68310)
$7,500.00 add to cart Available from
Heritage Book Shop
Share this item

Jew: being a defence of Judaism against all adversaries

New York : Johnstone & Van Norden , 1823
(click for more details about Jew: being a defence of Judaism against all adversaries)

Philadelphia : Re-Printed by Samuel Harrison Smith , 1791
(click for more details about Rights of Man)
View all from this seller>