The Appeal of Religion to Men in Power: A Sermon on Occasion of the Late Calamity at Washington 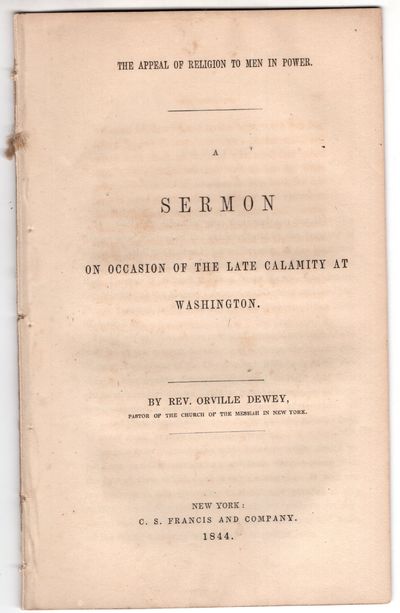 by Rev. Orville Dewey
New York: C. S. Francis and Company , 1844. First Edition. Pamphlet. Very good. 20p., removed. Dewey, pastor/minister of the Church of the Messiah in New York. On the sudden deaths of Secretary of State Abel P. Upshur, the Secretary of War Hon. Thomas W. Gilmer, Hon. Virgil Maxcy, late American Minister at the Hague, Commodore Kennon and Hon. David Gardiner, Senate of the State of New York,their death brought about by bursting of a gun aboard Steam Frigate Princeton. Ten in holdings. None found in trade at time of writing April 2020. (Inventory #: 2288)
$45.00 add to cart Available from
Little Sages Books
Share this item

Boston : The Page Company , 1914
(click for more details about California Romantic and Beautiful)
View all from this seller>