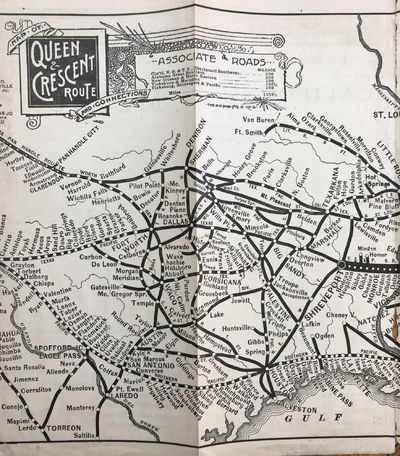 by [Railroads]
Cincinnati, 1888. Good.. Folding pamphlet. Some wear and worming along folds, with minor losses slightly affecting text. Some tanning and dust soiling. Scarce promotional and time table for the Queen & Crescent Route during August 1888. The route, begun in the early 1880s, was a cooperative between five railroad companies that connected Cincinnati to New Orleans and Shreveport via Chattanooga, Birmingham, and Meridian. One side of the pamphlet contains a map of the principal route and its national connections. The other side contains the schedules for each section of the route, as well as for connections from Shreveport and New Orleans to destinations in Texas, Mexico, and California via other railroads. (Inventory #: 1133)
$250.00 add to cart Available from
McBride Rare Books
Share this item