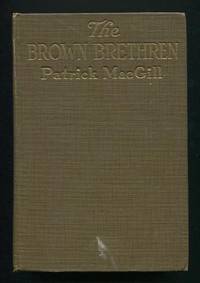 by MacGill, Patrick
New York: George H. Doran Company. Very Good. (c.1917). Unstated ed.. Hardcover. (no dust jacket) [moderately worn copy, dust-soiling to top of text block, slight bumping to lower corners, small white stain near bottom of front cover, some foxing/discoloration to endpapers, small vintage bookseller's label (Chas. E. Lauriat Co., Boston) at lower corner of ffep]. A World War I novel, following the "London Irish Regiment" through months of trench warfare in France, including its participation in the Battle of the Somme. The author (1889-1963), who had served in France himself in 1915 before being wounded and invalidated out of active service, was an Irish-born "minor war poet" who over the course of several years published a number of books (this was actually the fourth) that, in the words of one scholar, "constantly returned to and reinterpreted his wartime experiences." One contemporary critic cited MacGill's works for their "vividness [and] dramatic power," and the New York Times reviewer stated of this book that "there is not a superfluous word in it; it is stripped for action, keen, alive, tense, more like a human being than a book, a sort of incarnation of the war." . (Inventory #: 25399)
$40.00 add to cart Available from ReadInk
Share this item
ReadInk
Offered by