School Assignment of a Scrap Book of a ""European Tour"" 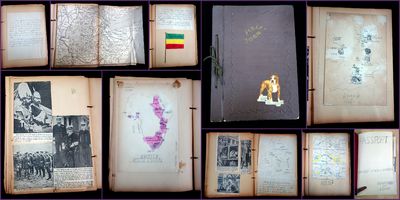 by Chester Katzman
New Haven, 1936. General wear. Pages are brittle from age. Most pages are loose or detached from string binding. Created by Chester Katzman, an eleven year old boy from New Haven, CT, this scrap book was a school assignment to record an imaginary European tour taken by the student. The book includes various short essays on what was seen, the history and agriculture of the countries and hand drawn maps and flags from his ""journeys"". At the front of the scrap book is his hand made passport that states Chester's occupation as 'student'.
Chester started his ""trip"" in Italy. He drew an agricultural map of the country including cut-outs or actual bits of product such as wheat and corn. He leaves Italy for Ethiopia and includes magazine cut-outs and newspaper articles about the Ethiopian unrest and war . Indicating his visit was cut short His essay indicates they left early for safety reasons. The British Isles next and the book ends on some of the British Empire's colonies, such as India. It includes a manuscript map with the locations of manufactured products.
The is also a manuscript map of Africa identifying British Possessions. It also includes several mimeographed and completed geography type assignments associated with the project. The scrap book is dated by the newspaper photographs and captions that state the King of England is Edward VIII, who both succeed and abdicated the crown in 1936. Brown covers with string binding. The front cover has a sticker of a bull dog with the caption "feeling bully". Measures 11 1/2"" x 8 1/4"" A creative and well constructed composition