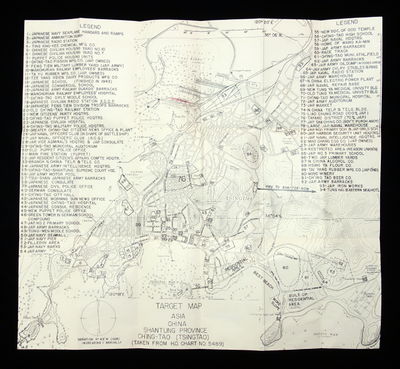 World War II allied map depicting strike targets in the Chinese city of Qingdao, located in the Shantung Providence, also called either Tsingtao or Ch'ing-Tao. The city was occupied by the Japanese from 1938-1945, and during which it became a large urban center. While the map does identify potential bombing targets, Qingdao itself was never really prioritized for heavy bombing during the war. The map depicts the city Qingdao along with its harbors: Taiping Wan (Iltis Bay), Iltis Bay and from the Tai Kiang (Great Harbor), Tsingtao Wan (Ch'ing-Tao Kou), Sia Kiang (Little Harbor). Ninety-four different locations, or strike targets, throughout Qingdao have been numerically identified which corresponds to a numerical index located along both the left and right sides of the map. It does not appear as though a priority to the targets have been given on this map, however most of the targets identified are Japanese military installations, including several different Japanese military barracks, the Japanese Army Intelligence Headquarters, Japanese Navy seaplane hangars and ramps, and the Japanese Army motor pool, along with Japanese schools, businesses, and transportation facilities are also singled out. There are several handwritten notes on the map, such a s a notation on the bottom right with states "to American Settlement & Beach (Japs Between)" along with an arrow pointing off the map. Wharf No. 1 in the Tai Kiang (Great Harbor) has been colored in with a red pencil. It is unclear why this was done.

Few comparable examples for this map have been located, which suggest that most did not survive the war. It is to be noted that this item has been trimmed slightly which removed a white border and the word "confidential" located on the top left of the other copies of the map found. Additionally, while the map is undated, and the specific Allied country and military branch responsible for its creation are not named, at the base of the map it does say "Taken From H.O. Chart No. 5489", which was a map of Tsingtao Bay published in July 1944 by the Hydrographic Office of the US Navy Department. Single sided. Measures 20 3/4" x 18 3/4". (Inventory #: 29017128)
$550.00 add to cart or Buy Direct from Eclectibles
Share this item