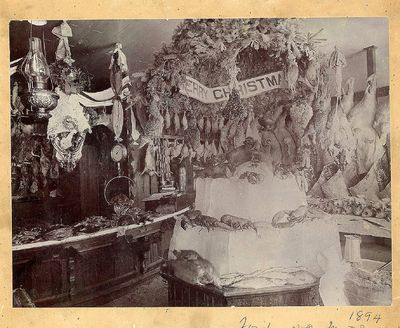 [1894]. General wear. Minor scratches. The second photograph is missing the bottom left corner of the matte board. . The first photograph is a black and white image of a Christmas display of various meat and seafood products. The caption "Jorden & Co. Meat Market, 1894" is on the bottom. The photograph shows the interior of the store with the store counter and walls behind it cover in meat products with a table in the center of the store covered in various seafood products. A "Merry Christmas" banner surrounded by foliage hangs from the ceiling. In the display are several different sizes of whole fish, lobster, rabbit, large birds such as pheasant, turkey or chicken, and large slabs of hanging meat, most like from a cow. The photograph is mounted on board. Measures 8 1/4" x 6 1/2" (photograph), 9 1/4" x 7 3/4" The second photograph depicts a black and white image of a exterior front of a butcher store with various meat products hanging from the windows. Two men in the traditional white apron stand on the sidewalk in front, and a third man can be seen through the doorway wearing dark clothes. The sign above the door says "Bright Bros.". There are various birds (with no heads) hanging on the exterior wall, most appear to be plucked chickens, though there are two larger birds with feathers, mostly likely turkey or pheasants, on display as well. Additionally there are several whole small pigs on the window sill., seated next to a stacked display of canned meat. Also hanging of the walls are large sides of beef. In-between the various meat products are green wreaths and garlands. The photograph is mounted on board. On the back of the board is written: Photo Bright & Wile, Main St., Old Hunter Block, empty lot [as of] 1989. Butcher & grocer later Greenblath Store". Measures 8 1/4" x 6 1/4" (Inventory #: 29001882)
$275.00 add to cart or Buy Direct from Eclectibles
Share this item