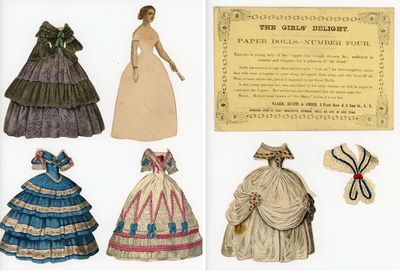 New York: Clark, Austin & Smith, 1858-1860. Neck bend; hand reinforcement. Small area of discoloration; one costume.. A 5 5/8" tall paper doll. The arms, head and upper torso are color printed, the remainder is blank by design. She holds a folded fan in her hand. Four (4) elaborate hand finished costumes and one shawl. With original envelope. Story with moral printed on front.

NELLIE - a youong lady of the "upper ten," --- with dresses, &c. sufficient in number and elegance for a prince of "the blood."Nellie has reached the age when mothers must "look out" for their daughters, unless they wish some youngster to come along and snatch them away, and take them off out West, or some where else, just as it happened to my friend Nellie. A nice young man saw her, "was captivated by her many charms -- as will he might be -- and now she is gone. Her mother has just discovered that she cannot spare her.MORAL. Mothers must beware of "the Beaux," before it is too late. Illustration - Howard p.23 (Inventory #: 27000623)
$400.00 add to cart or Buy Direct from Eclectibles
Share this item