A Comprehensive Manuscript Three Volume Language Series Set of Saxona, the Teutonic Element in the English Language, or A Primer of Anglo Saxon Words 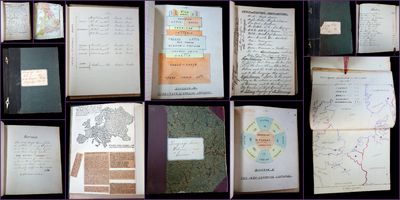 by J. T. Melchior
Jasper, IN, 1915-1920. General wear and rubbing. . A three volume set that explores in depth the etymology of the English Language, in particular the Teutonic (Germanic branch of the Indo-European language family, of which Anglo Saxons spoke) element found within the language. These three volumes were hand crafted by J. T. Melchior, and include the history of the Germanic Tribes invasion of what is now the United Kingdom, language charts, vocabulary lists, and mathematical analyses of English writing samples (mostly derived from newspaper clippings) to exemplify how many English words origins are Teotonic. The author's passion for this subject comes through from the very first page, the forward, where he states: "The bold Anglo-Saxon folk who settled in the merry England at a time now long agone [sic]; and their hearty speech - OUR MOTHER TONGUE - as it was in ye olden time and as it is spoken now, herein are told about in homely self-written words. JTM (all Saxon words)". The titles of the three volumes are as follows: Language Series Volume 1 "Saxona": The Teutonic Element in the English Language, A Primer of Anglo Sazon Words (1915, 120 pages), Language Series Volume 2, "Teutona", Anglo-Teutona, The Teutonic Element in the English Language (1920, 89 pages), and Language Series Volume 3, Indo-European Words, Language Charts (no date, 30 pages). The books also come with three printed maps, one hand drawn map, and five hand drawn language diagrams. J. T. Melchior is most likely John T. Melchior from Jasper, IN, who was a teacher for eight years before taking over his father's general store. Upon his retirement from his business, he dedicated his time to studying history and literature. Volume One has green marble covers with red accents while volumes two and three have green covers with black accents, with a brad binding. The back cover of volume two has an embossed decorative design. Measures 9" x 8".