The Tripod of Analeptic Therapy 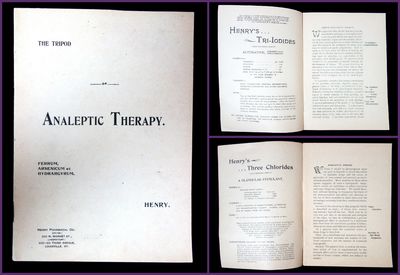 Louisville, KY: Henry Pharmacal Co., [1905]. General wear and toning. . A booklet describing the benefits of Analeptic Therapy, and the specific drugs used in the process: Henry's Three Chlorides and Henry's Tri-Iodides. Henry's Three Chlorides was made from iron, mercury, and arsenic, and was supposed used to treat chorea, chlorosis or anemia. The three elements of the drug supposedly worked in conjunction with one another as, "it is a well-known fact that the simultaneous exhibition of small does of arsenic and bichloride of mercury, besides augmenting markedly the action of iron, prevent entirely the disturbances of digestion the constipation, headache and tendency to vascular congestion and hemorrhage which oftentimes follows the use of any iron preparation for a considerable length of time. The small dose of arsenic seems to diminish excessive sensibility of the stomach." The second drug, Henry's Tri-Iodides, was made from colchicine (anti-inflammatory), decandrin (plant), solanin (steroid glycoside, poisonous), sodium salicylate (sodium salt of salicylic acid), and iodic acid (iodine), and was supposed to treat gout, rheumatism, sciatica, neurasthenia, defective elimination and other diathetio diseases. The last page of the booklet is an add for Henry's Ichtyhol soap, a medical soap for skin issues. 20 pgs. (including printed wrappers) OCLC 0 (Jan 2019) Measures 7" x 5". (Inventory #: 29001427)
$85.00 add to cart or Buy Direct from Eclectibles
Share this item